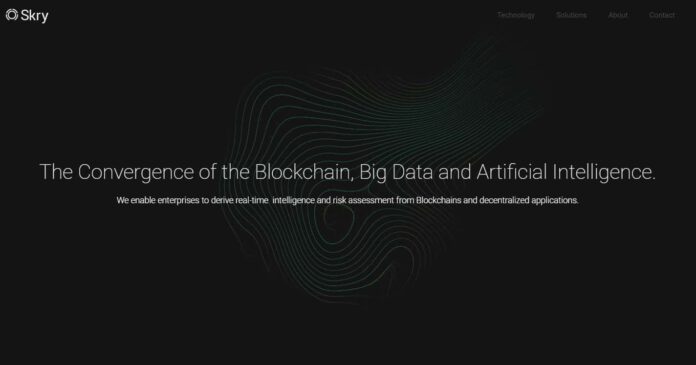 Blockchain Intelligence firm Skry – formerly known as Coinalytics – today unveiled a new name and logo, along with the addition of industry experts to its team. Dr. Akash Singh, former CTO Data Science at Huawei & Chief Researcher/Architect at IBM, will join Skry as Chief Technology Officer. As well as Dr. Masoud Nikravesh, a distinguished researcher with over 25 years of experience in the field of Artificial Intelligence as former Computational Science and Engineering (CSE) Director at CITRIS, UC Berkeley and Visiting Scientist at the Lawrence Berkeley National Lab, who joins the company as Chief Data Scientist.

“We are honored to have Akash and Masoud join our team,” said Fabio Federici, Cofounder and CEO at Skry. “Their extraordinary abilities in Big Data and Artificial Intelligence will prove to be an invaluable asset as we build and expand our business.”

“The reasoning behind the rebranding is to highlight our vision to converge the Blockchain, Big Data and Artificial Intelligence into the most advanced analytics platform for enterprises and financial institutions. While our first solution is focused on compliance and anti-money laundering for the Bitcoin Blockchain, we are really developing a platform that can be deployed agnostically of the underlying Blockchain and can adapt to any domain,” Federici continued.

Newly appointed Chief Technology Officer Dr. Akash Singh will be leading the development of the platform. In the past Dr. Singh developed petabyte scale parallel processing systems, analytics platforms and sophisticated cluster monitoring tools. He holds a PhD in Artificial Intelligence and is best known for championing the machine learning and probabilistic approach to Artificial Intelligence and Big Data problems. He brought together machine learning and computational complexity, leading to advances in artificial intelligence. His profound vision in applied mathematics, computer science and cognitive theory has been combined with other methods to build machine learning and knowledge representation, like IBM’s ‘Watson’ computing system. He was the Architect for the IBM project for over ten years, has been recognized by numerous industry awards and is a sought after keynote speaker.

“We are entering a new era of computing and Skry is developing cutting-edge technologies and solutions for the Blockchain industry – initially focusing on financial services,” said Dr. Singh. “I truly believe the Blockchain will change the way we perform transactions and allow for a new kind of applications enabled by smart contracts. This presents a once in a generation opportunity and I am excited to be part of Skry’s innovation and leadership team. We will advance Artificial Intelligence and Big Data infrastructure in order to make it easily accessible to the enterprise, uniquely positioning Skry to capitalize on the promise of this emerging technology.”

Complementing Dr. Singh’s work on the platform will be Dr. Masoud Nikravesh, who will contribute to the platform’s Machine Learning and Artificial Intelligence capabilities. Over the past 25 years, his research has been focused on the development of novel algorithms for advanced predictive analytics and statistical analysis & modeling.  His main focus has been on the application of soft computing (fuzzy logic, neuro computing, deep learning, genetic & evolutionary computing) and machine learning for pattern recognition, data mining & fusion with uncertain and incomplete information, as well as predictive, prescriptive and behavioral analytics. This includes risk analysis and prediction models such as credit risk scoring or anomaly detection for anti fraud solutions.

“Skry is at the forefront of applying Machine Learning and Artificial Intelligence to turn the Blockchain into actionable insights, which will have a crucial impact on the future of this technology, beyond Bitcoin. That’s why I am delighted to be part of this venture and explore new frontiers in science, technology and innovation,” said Dr. Nikravesh.