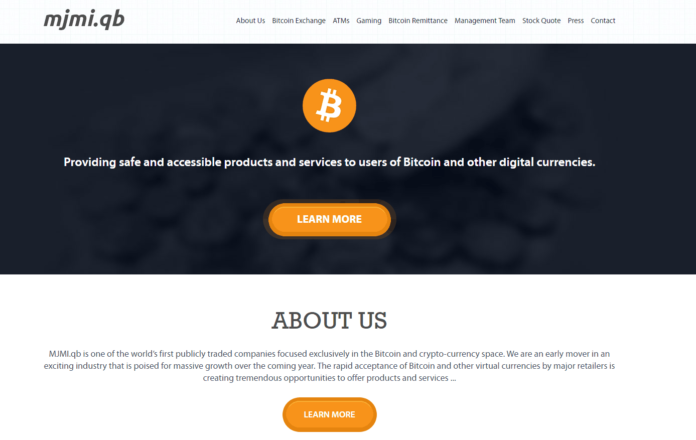 MarilynJean Media Interactive (MJMI) is excited to announce it has begun taking steps toward the use of a system recently approved by the SEC to issue shares via the Bitcoin Blockchain.

The United States Securities and Exchange Commission (SEC) recently approved a plan by online retail giant Overstock.com to issue company stock via the internet. This signals a massive shift in the way financial securities will be distributed and traded in years to come. The SEC approved Overstock’s Form S-3 heralding the beginning of the use of the Blockchain to distribute and track ownership of shares.

MJMI intends to leverage its Bitcoin exchange expertise and use of the Blockchain to potentially conduct a securities offering via the Internet. If approved, the company could conceivably issue shares on behalf of third parties who had also obtained SEC approval.

“We are excited to further expand our operations into Blockchain technology and its myriad uses, specifically within the financial sector. This technology could do for capital markets what the Internet did for consumers.”

MJMI is in the business of providing safe and accessible services for the users of Bitcoin and other crypto-currencies.

MJMI is currently exploring partnerships in several verticals within the crypto-currency space, including the multi-billion dollar remittance market. Management believes that several industries, including both international remittances, the trading of futures and options contracts as well as online gambling are on the verge of being revolutionized by the use of Bitcoin to effect transactions.

MarilynJean Media Interactive is among the first publicly traded companies focussed on bitcoin and the crypto-currency space. The company’s trading symbol is MJMI.QB.

The Blockchain is an enormous distributed database that runs across a global network of independent computers that are not controlled by any government. With Bitcoin, this ledger tracks the exchange of digital currency. The Blockchain can also track and independently verify the transfer of other forms of equity, including stocks, bonds and other securities. This technology has the potential to completely change the way equity markets function. It can literally replace the function of a stock exchange.

Crypto-currencies are a medium of exchange using cryptography to secure transactions and control the creation of new units. Bitcoin became the first decentralized crypto-currency in 2009. Crypto-currency is produced at a rate which is defined when the system is created and publicly known. By contrast, in centralized banking and economic systems, such as the Federal Reserve System, corporate boards or governments control the supply of currency by printing units or demanding additions to digital banking ledgers. However, neither companies nor governments can produce units of crypto-currency and as such the value of crypto-currencies are completely based on supply and demand, free from any governmental control. Many people believe crypto-currencies, and in particular bitcoin, hold the promise of being the most significant advancement in global finance in modern history. The advent of bitcoin creates a secure, easily accessible and transferable transnational currency that is completely liberated from political influence.

Facebook
Twitter
Pinterest
WhatsApp
Previous articleSwiss Blockchain DECENT Foundation Announces Details on Investment Fund
Next articleCanadians Moving Fast and Hard into Blockchain Space
Richard Kasteleinhttps://www.the-blockchain.com
In his 20s, he sailed around the world on small yachts and wrote a series of travel articles called, 'The Hitchhiker's Guide to the Seas' travelling by hitching rides on yachts (1989) in major travel and yachting publications. He currently lives in Groningen, the Netherlands where he has set down his anchor to raise a family and write. Founder and publisher of industry publication Blockchain News (EST 2015) and director of education company Blockchain Partners (Oracle Partner) – Vancouver native Richard Kastelein is an award-winning publisher, innovation executive and entrepreneur. He has written over 2500 articles on Blockchain technology and startups at Blockchain News and has also published in Harvard Business Review, Venturebeat, Wired, The Guardian and a number of other publications. Kastelein has an Honorary Ph.D. and is Chair Professor of Blockchain at China's first blockchain University in Nanchang at the Jiangxi Ahead Institute software and Technology. He has over a half a decade experience judging and rewarding some 1000+ innovation projects as an EU expert for the European Commission's SME Instrument programme as a startup assessor and as a startup judge for the UK government's Innovate UK division. Kastelein has spoken (keynotes & panels) on Blockchain technology at over 50 events in 30+ cities.