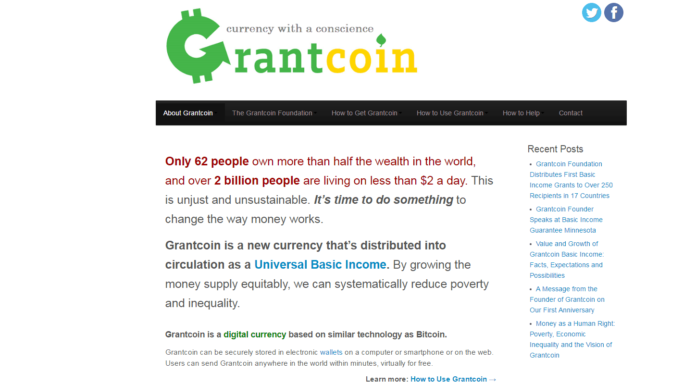 “Grantcoin is solidifying its position as the leading cryptocurrency that issues its money supply as a Universal Basic Income,” said Eric Stetson, founder and Executive Director of the Grantcoin Foundation. “A big thank you to all the people who signed up and verified your accounts for Grantcoin’s second quarterly distribution. You are early adopters of something very special — the first currency in world history that’s backed by a nonprofit NGO and designed to help create a more fair global distribution of wealth.”

Over 1,650 people have signed up to receive Grantcoin Basic Income, but about 900 of them did not verify their account by September 29, and therefore were not included in this round of Grantcoin distribution. If you missed it this time, sign up to be included in the next distribution in December — or if you already signed up but haven’t yet verified, please follow the instructions you received by email to verify that you are a unique human being.

A total of 10,647,758.620924 GRT was distributed in the second quarterly distribution of Grantcoin through Basic Income grants and referral bonuses. At the October 1 price of Grantcoin on Bittrex, the largestexchange where the currency is traded, that is worth approximately $5,323.88 in U.S. dollars.

The price of Grantcoin has doubled since the previous distribution of Grantcoin Basic Income on June 30. This is in keeping with the theory of the network effect, that the value of the currency should increase as the number of participants grows.

Last quarter, the Grantcoin Foundation created wallets for people who signed up but did not yet complete the verification process or who attempted to verify but were suspected of fraud. We sent Grantcoin Basic Income and referral bonuses into those wallets, but we did not give unverified recipients access to the funds — pending their successful verification for the program.

During the past three months, the Grantcoin Foundation reached out to all of these people with reminders and instructions to verify. Some of them verified their account for Grantcoin but most did not. As stated in our blog post on June 30, “Unverified applicants for Grantcoin Basic Income have until September 21 to verify their account, or else will forfeit the Grantcoin that is being held for them. Forfeited Grantcoin from this quarter will be added into the [next quarter’s] distribution.”

As a result, the amount of Grantcoin distributed on October 1 was larger than normal. This quarter, we discontinued the practice of including unverified applicants in the distribution.

In accordance with the Grantcoin Foundation’s plan to add 3.5% per year to the Grantcoin money supply through Basic Income grants, 0.875% was added in this way in the second quarterly distribution of Grantcoin. 451,521,313.915013 GRT was in circulation (i.e. not held in reserve by the Grantcoin Foundation) on October 1 before the distribution occurred, so 3,950,811.496756 GRT — plus the additional 1,839,672.178422 GRT that was forfeited and redistributed from last quarter — was distributed from a Grantcoin Reserve wallet designated for Basic Income Grants (wallet address: GV9ns15UAPwnxs4Bo4mNZ2SwN2RTaSNayR).

Evidence of this distribution can be found in these blocks of the Grantcoin blockchain, broken down into geographical groupings as follows:

Imagine the possibilities of a large database of Grantcoin wallets grouped by geographical location. As the Grantcoin network grows, we will begin to break them down into even more specific groupings such as state/province or region, and city/town or community. Smart contracts can be set up to enable charitable givers to donate money directly, instantly, to the people of nations and localities — for example, if there is a natural disaster that strikes a particular place in the world. Grantcoin could therefore become a powerful tool for direct charitable giving.

4,857,274.945493 GRT in referral bonuses were distributed this quarter from a Grantcoin Reserve wallet designated for Growth Incentives (wallet address: GSopxVrRWDM3hnBtoJFKTf7qamz7H3S5R4). These transactions were sent on October 2.

480 people received a referral bonus this quarter. 102 people referred at least one person to the program (worth 7,649.251883 GRT per referral), and the others received a bonus (3,824.625941 GRT) for signing up with somebody’s referral code. Note: If you referred somebody who signed up but has not yet verified for the program, you will not receive the corresponding referral bonus until they verify.

Evidence of the distribution of referral bonuses can be found in these blocks of the Grantcoin blockchain, broken down into groupings as follows:

The top referrer this quarter earned the Grantcoin equivalent of $378 U.S. dollars — great job! And it took less than 100 referrals to do it.

Thank you to everyone who participated in the Grantcoin referral program. You’re helping Grantcoin grow exponentially, which, if it continues, will give this currency a good chance of world-changing success. In some countries Grantcoin could soon be on the verge of going viral, thanks in large part to your efforts to spread the word. Let’s keep the momentum going!

Wallets To Be Distributed This Week

When people verified their signup for Grantcoin Basic Income, they were given the option of either creating their own Grantcoin wallet and sending us the address, or having the Grantcoin Foundation create a wallet for them. Most people chose the latter option.

We distributed Grantcoin into all of these wallets, but people who didn’t create their own wallet don’t have access to the funds yet. We will provide the address and private key to each person for whom we created a wallet — this information will be sent by encrypted email within the next few days.

Automation, Web-Based Distribution, and the Future of Grantcoin Basic Income

In closing, some quick thoughts on what we’re working on to improve the methodology and user experience for our Basic Income program.

The first two quarterly distributions of Grantcoin Basic Income have been done with a LOT of manual labor. Now that Grantcoin is becoming popular, we’re investing in automation to make it easier to grow at a faster rate without overwhelming our human personnel. We expect that by the end of October, the signup and verification process will be fully automated, except for a small percentage of manual audits.

We’re also setting a goal that Grantcoin distribution will be automated by the end of this year. Participants will be able to receive and spend their Grantcoin through Ekata.social, a web-based social media platform. For the average Grantcoin user — most of whom are not familiar with cryptocurrency technology — that means an easier user experience compared to the desktop QT wallet software.

We Need Your Help

If you like what they are doing and you want to see the Grantcoin project continue to grow and achieve greater milestones of success, please help. Donate to the Grantcoin Foundation, buy Grantcoin, or volunteer your time and talent.

Together with Grantcoin you can create a world in which money:

“…shall be issued to all people as a human right, as a universal basic income to be enjoyed by all — to compensate, at least partially, for the accidents of birth and circumstances of fortune that have blessed or condemned different people and regions of the world to wealth or poverty.”

That’s the Grantcoin Mission, and they are doing their best to bring it to fruition.