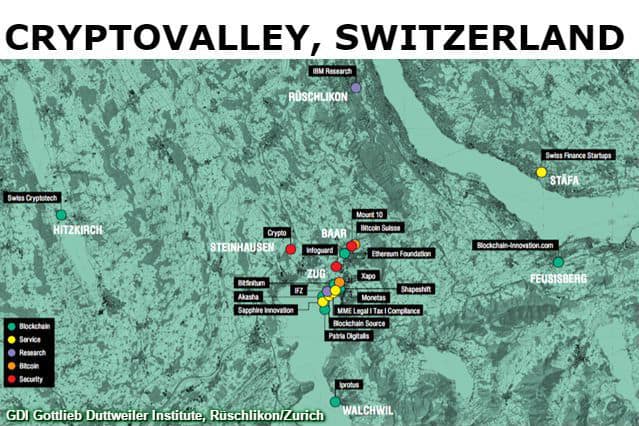 While governments in the US (particularly the SEC) , China and Russia have all taken strict or uncertain regulatory positions toward digital currencies, Switzerland has welcomed the movement with open arms.

During a meeting of the Swiss Federal Council on February 1st 2017, the Federal Council initiated a move towards amending the countries’ Banking Act and Banking Ordinance to ensure that barriers to market entry for Fintech firms are reduced and that the competitiveness of the Swiss financial centre is enhanced.

It was noted that due to the rapidly progressing digitisation in the Blockchain area,  business models will develop which are not yet conceivable today and the council promised to swiftly propose the necessary regulatory adjustments if required.

This is great news for Cryptovalley in Zug. Located just south of Zurich with a population of 120,000, Zug is one of the smallest of Switzerland’s 26 cantons and it has one of the country’s lowest tax rates, introduced in the 1940s as a way to lift itself out of poverty.

Cryptovalley in Zug is already famous as a laissez faire hub virtual currency firms. The 30-kilometer stretch of land from Zurich to Zug offers Blockchain startups progressive laws, a competitive hiring environment and low taxes a mix that has attracted many crypto entrepreneurs looking for a place to gain traction amid an uncertain international legal climate.

When tax reforms and the end of banking secrecy posing a threat to its business model, the canton wants to reinvent itself as a “Crypto Valley” – and has now become a base for Blockchain start-ups such as Akasha International, Ethereum Foundation, Melonport AG, Modum.io, SingularDTV and many others.

And it’s a good place for Blockchain startups offering:

According to a report last year by Michael del Castillo at Coindesk in June 2016, two members of the Swiss Parliament’s Federal Assembly proposed a total of three blockchain-related motions designed to make it easier for the financial sector to anticipate ramifications of blockchain technologies; “consolidate” Switzerland’s position as a blockchain leader; and make it easier for blockchain startups to hold customer funds without being classified as banks.

Swiss authorities and industry are behind Zug’s push into crypto finance, believing it will allow the financial sector to diversify as the demise of banking secrecy looms.

“If we don’t take part at the front of ‘fintech’, we don’t deserve our title as a global financial center,” Martin Hess of the Swiss Banking Association told Reuters.