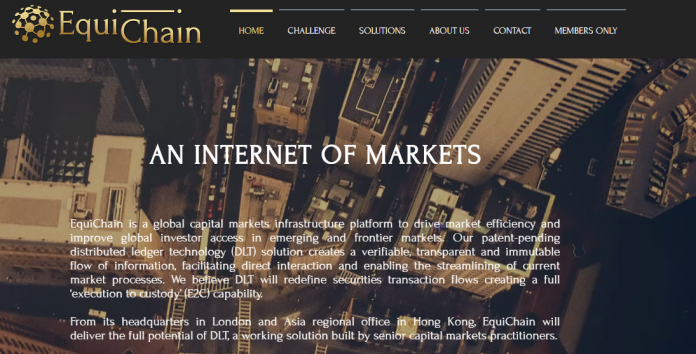 EquiChain, a London-based fintech company, is in discussions with regulators to launch a pilot in emerging markets this year for end-to-end execution to custody using distributed ledger technology.

Nicholas Bone, founder and chief executive of EquiChain, said that that the firm is different from other DLT, or Blockchain, initiatives because it is working with regulators and it has focus on emerging markets.

“We are having a number of conversations with regulators as developing international standards for Blockchain is important in capital markets,” Bone added.

The International Organization of Securities Commissions warned in a report last week that the numerous Blockchain networks being developed need to communicate and operate with each other. Iosco said in a Research Report on Financial Technology that a large number of Blockchain proofs of concept are ongoing and even if they are successful, implementation in the securities markets may raise technological, operational, business and regulatory challenges including interoperability between different networks.

“In the potential area of application for post-trading settlement, it will be important to ensure interoperability among the systems of all current market participants (brokers, issuers, investors, trading venues and financial market infrastructure operators),” added Iosco. “It is also essential for different DLT networks to communicate and operate with each other.”

Bone continued that EquiChain will be able to work with any Blockchain protocol such as Hyperledger, Ripple or Corda.

Hyperledger is hosted by the Linux Foundation as an open source project for cross-industry Blockchain technologies; Ripple is an interbank rules-based Blockchain payments network while Corda has been developed as a Blockchain for use by regulated financial institutions by the R3 consortium, which has more than  70 members.

“We don’t want to get into a Betamax versus VHS situation,” added Bone, referring to the fight between different proprietary formats for home video recorders.

Hugh Madden, co-founder of Blockchain solutions provider ANX International, is EquiChain’s chief technology officer. He told Markets Media that EquiChain is working with a select group of institutions and regulators and chose to focus on emerging markets where there is less existing infrastructure, and so more incentive for change.

Equichain has an Asia regional office in Hong Kong and will begin in the Middle East with support from the Abu Dhabi Global Market, Bahrain Bourse and Qatar Stock Exchange. Asset managers such as Henderson Global Investors and Legal & General Investment Management are also supporters.

“We are working with people who want to move to Blockchain and redefine the post-trade architecture with the blessing of regulators,” said Madden. “For a fintech firm there is no easier time to engage with regulators as there has been a proliferation of sandboxes to allow testing.”

For example, the UK’s Financial Conduct Authority launched a sandbox in 2015 to allow businesses to test innovative products, services, business models and delivery mechanisms in a live environment and make it cheaper and quicker for fintech firms to meet regulatory requirements and go live.

Bone said EquiChain will initially focus on equities. “Once that is 90%

“Once that is 90% completed, then there is synergy to digitise other asset classes,” he added.

Blockchain has the potential to radically decrease post-trade costs through the use of a trusted centralised ledger which can be updated in near real-time, removing the need for numerous intermediaries between the counterparties of a trade.

For example, EquiChain’s working prototype is a hybrid system which consolidates the currently siloed functions of a securities transaction such as an asset manager, custodian, broker, exchange and central securities depository. Madden said: “EquiChain’s use of cryptographic signatures reduces counterparty risk and prevents fraud, making Blockchain-based transfers safer than other alternatives.”

The Post-Trade Distributed Ledger Group of nearly 40 financial institutions and market infrastructures said in a report today that  48% of members believe Blockchain will be adopted in the financial post-trade area in three to five years. However, 21% also said adoption will take more than five years.

“The big barrier to growth, however, is seen as caution: fears over adoption and hesitation about embracing what remains cutting-edge technology. This is a core focus for the PTDL Group – engaging with financial services firms, technology companies and other stakeholders and helping catalyse adoption across the world for the benefit of all parties the financial post-trade area.”

Facebook
Twitter
Pinterest
WhatsApp
Previous articleUK Government Approves Tramonex Labs to Issue Currency on Blockchain
Next articleHexayurt Capital presents the Internet of Agreements at the World Government Summit
Richard Kasteleinhttps://www.the-blockchain.com
In his 20s, he sailed around the world on small yachts and wrote a series of travel articles called, 'The Hitchhiker's Guide to the Seas' travelling by hitching rides on yachts (1989) in major travel and yachting publications. He currently lives in Groningen, the Netherlands where he has set down his anchor to raise a family and write. Founder and publisher of industry publication Blockchain News (EST 2015) and director of education company Blockchain Partners (Oracle Partner) – Vancouver native Richard Kastelein is an award-winning publisher, innovation executive and entrepreneur. He has written over 2500 articles on Blockchain technology and startups at Blockchain News and has also published in Harvard Business Review, Venturebeat, Wired, The Guardian and a number of other publications. Kastelein has an Honorary Ph.D. and is Chair Professor of Blockchain at China's first blockchain University in Nanchang at the Jiangxi Ahead Institute software and Technology. He has over a half a decade experience judging and rewarding some 1000+ innovation projects as an EU expert for the European Commission's SME Instrument programme as a startup assessor and as a startup judge for the UK government's Innovate UK division. Kastelein has spoken (keynotes & panels) on Blockchain technology at over 50 events in 30+ cities.