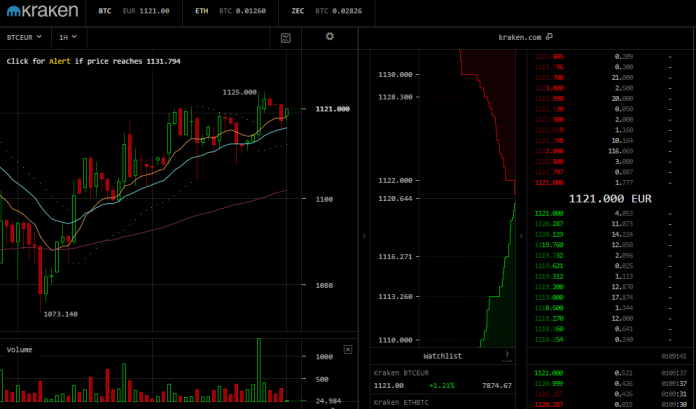 Kraken, the trusted global digital asset exchange, is pleased to announce the acquisition of the popular charting and trading platform Cryptowatch  – used by thousands of traders to chart over 150 markets in real-time and trade up to 22 digital assets through a highly user-friendly interface. Cryptowatch has seen rapid growth in the past two years, increasing its active user-base by 700 per cent.

Kraken is also pleased to announce that Cryptowatch founder, Artur Sapek, is joining the company to both continue developing Cryptowatch and lead the development of Kraken’s interface.

“In just 2 years Cryptowatch grew into one of the pillars of the digital asset trading community,” Sapek said. “Teaming up with an exchange was the natural next step, and Kraken was my first choice. The Kraken team has built a very mature and reliable exchange, and I look forward to working with them to deliver the best trading software in the industry.”

Clients will immediately benefit from the acquisition, because Kraken has leveraged Cryptowatch to release an upgraded trading interface that is now available at Kraken along with instructions on how to get started trading on the platform here:

“I’m thrilled to welcome the Cryptowatch trading platform and its founder into the Kraken family,” said Kraken CEO Jesse Powell. “As the industry’s leading charting tool for traders, we plan to devote more resources and talent to further enhance its offering. And we’ve purposed the technology to provide a great new charting and trading platform to Kraken clients as the first step in improving our own interface. It’s a great start to 2017 and I can’t wait to share what else we’ve got in the pipeline.”

Cryptowatch is the most recent in a long series of landmark M&A deals over the past year that Kraken has leveraged to expand its global client-base, add new services, and bring highly talented members to its team.

Based in San Francisco, Kraken is the world’s largest global bitcoin exchange in euro volume and liquidity. Kraken’s clients also trade US dollars, Canadian dollars, British pounds, Japanese yen and 10 other digital assets besides bitcoin, including ether, on a platform consistently rated the best and most secure digital asset exchange by independent news media. Founded in 2011, Kraken is a constituent of the CME FI Bitcoin Index, was the first bitcoin exchange to have its market data displayed on the Bloomberg Terminal, the first to pass a cryptographically verifiable proof-of-reserves audit, and one of the first exchanges to offer leveraged bitcoin margin trading. Kraken is trusted by hundreds of thousands of traders, institutions, and authorities across the world, from Toyko’s court-appointed trustee to Germany’s BaFin regulated Fidor Bank. Kraken is backed by investors including SBI Investment, Money Partners Group, Hummingbird Ventures, Blockchain Capital, and Digital Currency Group, among others. For more information, visit https://www.kraken.com/.