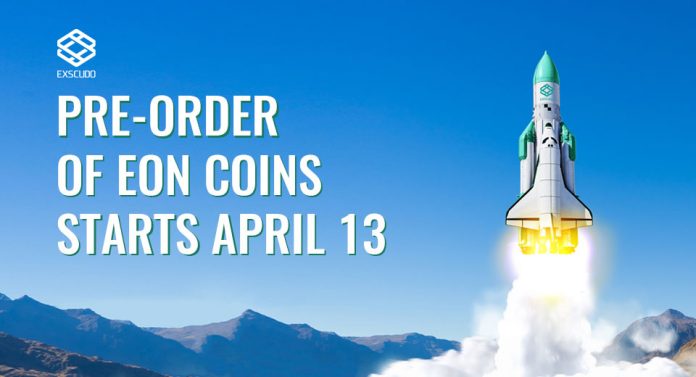 On April 13, Exscudo starts EON coins pre-order. Investors can book the needed amount at 0.0002 BTC for a coin and redeem them on April 25, when the ICO starts.

Exscudo announces the start of the EON coins preorder, the fuel of the Blockchain-based platform that provides the infrastructure for the Exscudo services. The coins will be emitted on the market with the start of the ICO on April 25. The overall amount of the EON is limited to 240 mln coins, 150.720.000 will be available for sale. Anybody can book some coins beforehand, to be sure the hypothetical deficit will not affect them. Besides, Exscudo provides substantial bonuses for those who book the EONs and redeem them just with the ICO start.

Those who book the investment package in advance and buy them out within the first 48 hours during the ICO will receive a 10% bonus in the form of additional EONs to the account. Investors that buy non-reserved coins during the first 10 days of ICO are awarded with 5% bonus coins. During the second 10 days the bonus is 2.5%. There will be no bonuses later. All pre-orders will be listed in one common ‘book’ and will be closed upon the appropriate payment within 48 hours from the start of ICO in higher priority than other orders.

In addition, all  those who participate in the ICO will receive a bonus for their personal account on the stock exchange. Everyone who participates in the ICO will get a zero commission for all operations on the Exscudo exchange for a daily trading-exchange volume equal to the amount invested. This lifetime privilege is assigned to the account of an investor.

The EON coins are the fuel of the Blockchain platform EON, developed by the Exscudo team. EON enables seamless functioning of a wide range of solutions: a Stock exchange, a merchant for stores, trading terminals, debit cards and the mobile chatwallet app Channels. All of them are connected to one single liquidity center, the Stock exchange by means of the EON Blockchain.

Although the announced price of 1 EON is 0.0002 BTC, there is also an option to obtain EONs through participating in the company’s Bounty campaign in the media.