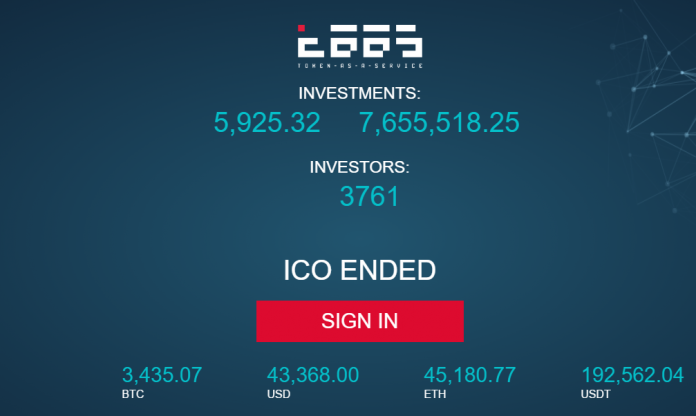 TaaS, a closed-end fund dedicated entirely to Blockchain assets, has announced the conclusion of its Initial Coin Offering (ICO) on April 27, 2017. The final tally on its highly successful raise was $7.7 million, with 3761 investors from across the globe. TaaS has reserved 2 per cent of the collected funds for bounty programs. Additionally, the token, TaaS, will be available on exchanges Livecoin and Kuna from today.

“TaaS is extremely pleased with the successful crowdsale result, which garnered a high degree of public interest well before the ICO opened. The investment rate reflects the strong market demand for a platform that reduces the barriers to entry for investing in cryptocurrencies, a niche that TaaS has now filled.

TaaS would like to thank the community for the enormous show of support it received and reaffirm its commitment obtaining the highest yields possible for its investors. As the token is integrated with exchanges Kuna and Livecoin today, with further exchanges becoming available soon, investors can benefit from easy, fully transparent and convenient access to the vast cryptocurrency market,” he added.

TaaS token-owners will collect 50 per cent of quarterly earnings in ETH via an Ethereum smart contract. To grow the capital pool without attracting additional investment, 25 per cent of earnings will be reinvested back into the fund. This allows the Net Asset Value (NAV) of a token to increase over time, making TaaS the first Blockchain token to have its value explicitly tied to the performance of a parent project.

TaaS has outlined plans to use the money raised to rapidly accelerate the development of its in-house Cryptographic Audit technology. Cryptographic Audit is a set of autonomous auditing techniques that track, record, and timestamp trading activity. This technology was built by TaaS to ensure all profits are properly recorded, money flow is transparent, and the company is in possession of all declared funds. By design, it will simplify investors’ due diligence and provide tools for maximum transparency.

In addition, TaaS is developing a platform called Kepler with a portion of the funds raised. Similar to a Bloomberg terminal, Kepler will provide assistance to cryptocurrency investors such as market research to performance predictions. The platform will include an audit of each cryptocurrency and token, including a measurement of its likeliness to succeed. Specifically, its quantitative tools will offer data into the cryptocurrency market, such as hashrate graphs, price performance and indexes, and volatility measurement.

“TaaS is proud to launch the token into the market and offer investors a new way to participate and benefit from the growing Blockchain space. We trust the high degree of transparency and user-friendly experience provided by the Cryptographic Audit feature will set a new standard for future ICOs.”

Token-as-a-Service (TaaS) is a last generation closed end fund that allows its investors to capitalize on the rise of Blockchain markets. Utilizing Ethereum Blockchain and its Cryptographic Audit technology, TaaS offers a brand-new, comprehensive approach to capital raising, fund management, and auditing with full transparency to its investors. TaaS was co-founded by Blockchain pioneers Konstantin Pysarenko, Ruslan Gavrilyuk, Dimitri Chupryna, and Maksym Muratov and has professional team members from USA, Ukraine, Poland, South Africa and China.