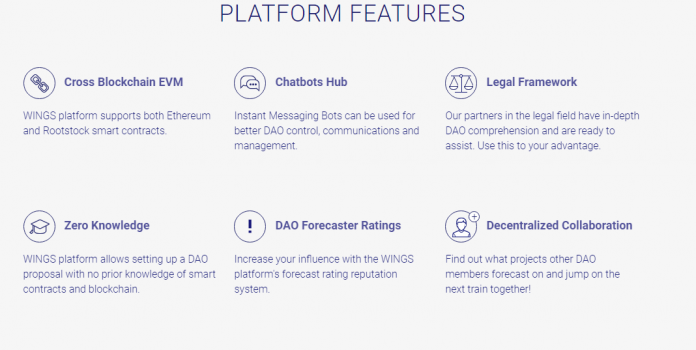 The much anticipated WINGS token launch has finally arrived. Following a successful backing campaign and the release of the WINGS DAO alpha platform, the WINGS token has been released on the Ethereum network and integrated on the Liqui and Bittrex exchanges.

The WINGS Foundation intends to roll out the ability for anyone to easily set up and get community backing for crowdfunding on the Ethereum network over the next several weeks.

“After several months of development and testing, making key hires in our development organization and partnership with several smart contracts auditors we are finally beginning to roll out WINGS on the Ethereum network,” said Boris Povod, WINGS Foundation President “Soon anyone will be able to easily create ICO’s modeled after the popular Gnosis, Dfinity and Cosmos Network crowdfunds with a few clicks.”

“We want to minimize the risk in participating in ICOs by enabling community consesus and  self-regulation”, Boris added “with that in mind WINGS holders can vet projects, forecast on their valuation or how much they can raise, and help the projects achieve their funding forecast with promotion to their social network circles.”

The WINGS token saw just under a $1 million worth of WINGS tokens exchanged on the BTC and ETH markets on its first day on the popular Bittrex and Liqui exchanges, showcasing the popularity of the token among the cryptocurrency and WINGS decentralized autonomous organization (DAO) community.

“At Bittrex, we look for innovative projects and business models.  We’re continuing our support for the Ethereum ecosystem with the launch of WINGS.”

So what does the WINGS token do?

The WINGS token will be used in the upcoming WINGS platform running on the Ethereum network to allow community members to select and vet initial coin offerings (ICO’s) or crowdfunding proposals using decentralized consensus, and then forecast the funding success of accepted projects. Currently in its alpha stage, WINGS will provide the necessary tools for the creation, vetting, valuation, promotion, funding, and decision making of decentralized projects using innovations such as smart contracts and forecast markets – a no-loss cousin of the much hyped prediction markets.

With WINGS Blockchain developers can easily gather the necessary community support and funds to build up their ideas and teams, while project backers can be assured that projects have been vetted and have undergone decentralized due diligence by WINGS DAO community token holders, who are rewarded according to how accurate their forecast and their historical forecast rating. The system creates an ecosystem where innovators, project backers and analysts each play their part to kickstart projects with security, transparency and ease, ending some of the riskier facets of cryptocurrency investment.

The WINGS token can be bought and sold on the Bittrex and Liqui exchanges with Bitcoin, Ethereum and USDT, and  more exchanges and trading pairs may follow.

Based in Switzerland and comprised of a decentralized team of Blockchain professionals aiming to bring Blockchain-enabled projects to the mainstream. WINGS makes DAO technology accessible to entrepreneurs and companies who are looking to leverage the global reach of bitcoin and other Blockchains for project funding, the power of swarm intelligence powered forecast markets for higher quality decision-making, the versatility of smart contracts for a global decentralized agreement framework, and the ease of use of the instant messengers for audience reach.  For more information, visit the WINGS website at  https://wings.ai