In an excellent post by Nick Tomaino a Tech investor @RunaCapital and publisher of TheControI – he has cobbled together some serious numbers showing that ICO investment in Blockchain startups has blown by VC investment in the past 12 months.

While venture capitalists have invested some $140 million into Blockchain startups over the past 12 months, ICOs have raised over $331 million in the same time frame. This is a huge reversal of the numbers from 2016 where VC pumped in over a billion into Blockchain and Bitcoin while ICO provided a mere $270 million since 2013, according to Smith and Crown (not including the $150 million raised in The DAO scandal, which was returned to investors). 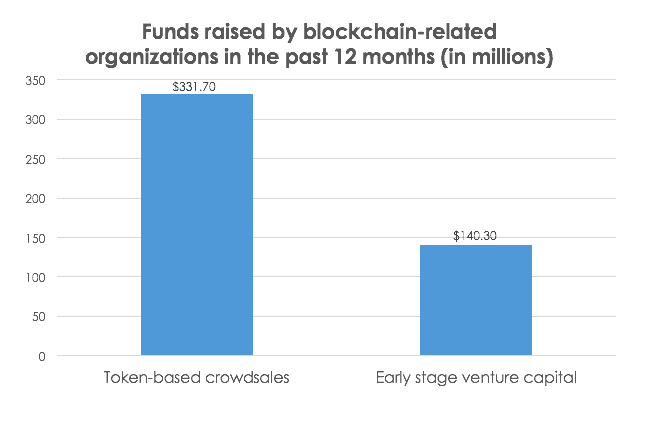 There has been a lot of money raised via tokens in the past year ($331.7M+ by my estimation). While blockchains make it easier than ever for entrepreneurs to raise funds (it’s as simple as creating an ETH address and can be done without relying on any bank or any third party service), tokens should not be thought of as a funding mechanism first and there should be a clear purpose for the token (either as a usage token, a work token, or both). There is regulation in the U.S. that prevents the unregulated sale of securities to the public and there are many reasons the leading early stage technology companies today delay IPO, most notably that when you’re publicly traded it’s hard to have a long-term focus. Lack of long-term focus can be paralyzing to technology projects.

Tamaino has created a spreadsheet of ICOs in 2016 and offers a few major takeaways:

There’s an outlier, The DAO, which raised $150M last year and quickly disappeared. While this was an unmitigated failure, the end result of the failure was a successful Ethereum hard fork (the first hard fork for a blockchain at scale). This demonstrates to me that positive things can come away from the failures as well as the successes.

There’s been a lot of greed driving the token momentum in the past 12 months. When you see a project like Gnosis, which last week raised $12.5M at a $300M valuation by launching a Dutch auction and only selling 4% of tokens, you should not dismiss tokens as a whole; this is just one approach. But you should recognize there’s a lot of bad approaches and a lot of greed driving the current momentum.

There are no live products in this group of 29 crowd sales. Raising significant funding before any product is generally a bad idea. If you look at the history of startups, the vast majority of companies that have set expectations high with a lot of funding pre-product have failed. I think there will be a lot of failure in this batch and expect to see better practices emerge for token-based crowd funding in the future.