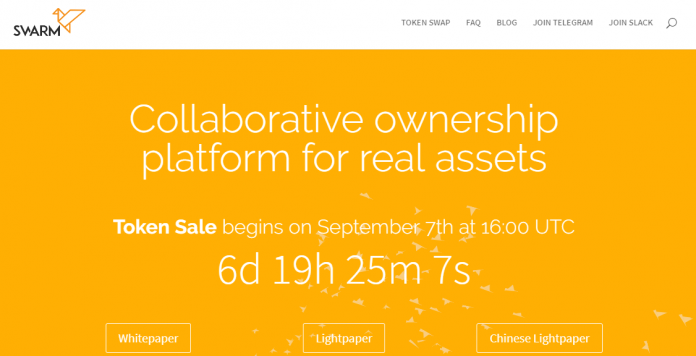 Swarm, a collaborative ownership platform for real assets, today announced the terms of the WINGS engagement for their upcoming token generation event on September 7, 2017. WINGS is an Ethereum-based platform that harnesses the wisdom of crowds for crowdfunding price discovery and for social promotion of projects to early adopters.

Swarm offers a unique market infrastructure model that enables investing crypto assets into real assets, and deploying traditional capital into real markets in a new way. With Swarm’s infrastructure investors can create and operate asset-backed tokens and participate in composite of wealth creation.

Swarm´s system is designed to be adaptable for full regulatory compliance in multiple jurisdictions. The corridor between the public and private blockchain tokens is additionally designed to be fully AML/KYC compliant and tokens follow the model of existing exchanges. For more information see the white paper here.

Holders of WINGS tokens will be able to forecast the result of the upcoming Swarm token sale which will start on September 7, 2017, and share their forecast with their social graph thus reaching a higher level of trust among early backers who can review sentiment by crowd aggregate or individuals in their social network. The Ethereum network gives an immutable, and 100 percent accountable track record of the token sale evaluation from a globally diverse group of crypto experts that comprise the WINGS community.

“Swarm is one of the premier projects in the blockchain space and a true pioneer in offering a tangible solution to one of the biggest problems faced by cryptocurrencies, which is linking crypto assets with real assets, with full regulatory compliance,¨ said Dominik Zynis, Head of Communications, WINGS. ¨We are pleased to have Swarm use WINGS for their token sale and look forward to further collaboration on mutual deal flow.”

Once the Swarm token sale ends WINGS forecasters will be rewarded based on their forecasts accuracy with up to 975,000 Swarm if the hard cap if reached (1.5 percent of the total tokens sold which is capped at 65 million Swarm).

“WINGS has a commendable track record of evaluating some of the largest and most popular token sales of 2017,” said Joel Dietz, Founding Partner, Swarm. “We intend to use the WINGS valuation service to estimate the target size of our own raise and other sub-asset tokens.”

WINGS token holders will be able to collect their algorithmically determined forecasting reward payment, based on the math model designed by Dr. Sergey Popov and Artem Gorbachev, PhD, by simply calling on a smart contract which will distribute their allotted tokens as well as adjust their publicly available WINGS Forecast Rating.

The WINGS community will have the chance to evaluate and provide feedback on the Swarm token at https://wings.ai starting August 31, 2017. Subscribe for the timely updates about the forthcoming token sale event at https://swarm.fund/.

Facebook
Twitter
Pinterest
WhatsApp
Previous articleLykke Partners with CryptoTax
Next articlebitJob, A Global, Decentralized Marketplace for Student Employment, powered by Ethereum engages WINGS for Price Discovery and Social Engagement
Richard Kasteleinhttps://www.the-blockchain.com
In his 20s, he sailed around the world on small yachts and wrote a series of travel articles called, 'The Hitchhiker's Guide to the Seas' travelling by hitching rides on yachts (1989) in major travel and yachting publications. He currently lives in Groningen, the Netherlands where he has set down his anchor to raise a family and write. Founder and publisher of industry publication Blockchain News (EST 2015) and director of education company Blockchain Partners (Oracle Partner) – Vancouver native Richard Kastelein is an award-winning publisher, innovation executive and entrepreneur. He has written over 2500 articles on Blockchain technology and startups at Blockchain News and has also published in Harvard Business Review, Venturebeat, Wired, The Guardian and a number of other publications. Kastelein has an Honorary Ph.D. and is Chair Professor of Blockchain at China's first blockchain University in Nanchang at the Jiangxi Ahead Institute software and Technology. He has over a half a decade experience judging and rewarding some 1000+ innovation projects as an EU expert for the European Commission's SME Instrument programme as a startup assessor and as a startup judge for the UK government's Innovate UK division. Kastelein has spoken (keynotes & panels) on Blockchain technology at over 50 events in 30+ cities.