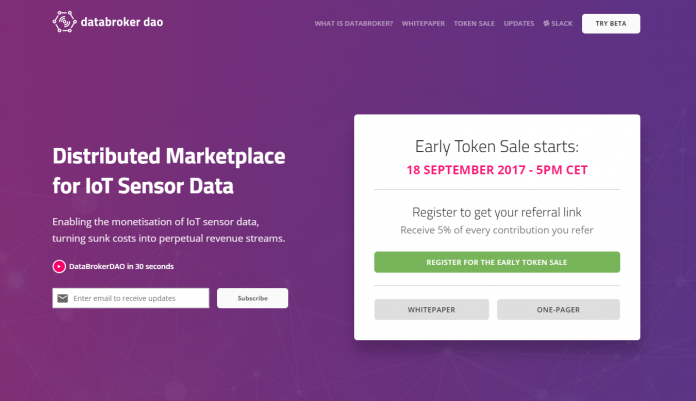 Individuals, companies, researchers and governments are spending hundreds of billions each year on buying and maintaining IoT sensors according to Verizon and McKinsey studies. The growth of investment and applications in IoT is enormous, and yet, the data captured by these devices is currently firmly locked up in data silos and walled gardens.

The DataBroker DAO intends to bring change to this situation and unleash the potential of data that is currently inaccessible, moving data from uni-purpose to broadly accessible for the broad creation of value added services. As with the financial markets, where the importance and value of company data have been apparent for decades, giving rise to Bloomberg Market Data, Thomson Reuters, Fact Set and many data service vendors, the same opportunity will emerge for IoT sensor data via DataBroker DAO.

The past few months the DataBroker team has been hard at work to build the working BETA platform. Leading up to the token sale, more and more of the code underlying the platform will be open-sourced. The core features of the BETA platform currently consist of the wallet functionality, the data streams listings, sensor (data) details and the dataset listings.

The core marketplace functionality is powered by an Ethereum smart contract, which enables the listing of the data for sale by IoT sensor owners and the purchase of the data by data consumers with an ERC20 compliant utility token.

traditional cloud infrastructure. It is then subsequently anchored to a public Blockchain, such as the ethereum Blockchain to ensure the integrity of the data being bought and sold.

You can try out the BETA platform at https://beta.databrokerdao.com

What others are saying about DataBroker

“I was impressed by the DataBroker platform when SettleMint first provided a private demo to Medici Ventures in January 2017,” said Medici Ventures President Jonathan Johnson. “With the analysis of product-market fit for DataBroker that SettleMint has done in Europe, the Middle East and Asia over the past six months, and the continued improvement of the platform, SettleMint has made great strides towards commercializing DataBroker. I’m excited to see more in the months ahead. The sale of the DATA utility token for use in DataBroker DAO is well thought out and well-constructed. The DATA utility token is integral to the efficient economic functioning of the DataBroker DAO ecosystem.”

“The intersection of IoT and Blockchain is enormously promising,” said Patrick M. Byrne, CEO and founder of Overstock.com, Medici Ventures’ parent company. “For sensor- owning organizations, the ability to use an immutable ledger to store data, ensure its integrity, and provide a clear path to data monetization, is, a stellar example of the promise of Blockchain. The value of the IoT sensor market is greater than $600 billion USD per year, and is expected to double in the next 3 years, simply for primary usage of the data by the sensor owner! The magnitude and potential value of a marketplace for data-hungry third parties is staggering.”‘

DataBroker DAO will be organising an early token sale starting on the 18th of september, which will be running for 4 weeks or until the hard cap is reached.

The token sale of DataBroker DAO is a so called multi-stage sale. Instead of offering all the available tokens at once, like many other ICOs have done in the past, DataBroker DAO will do an early token sale at which they’ll be offering 5% of the tokens (11.250.000 DATA) at a rate of 1200 tokens per ETH (20% bonus compared to main sale).

The goal of this early token sale is to bring the platform up to v1.0 readiness, and more importantly onboard a sizeable group of both consumers and suppliers of data. The proceeds of the early token sale will be spent on growing the team to 8-10 people ranging from business developers, community and development profiles. Additional spending will be allocated to operational costs like infrastructure, office space, marketing and legal expenses.

Interested to learn more about the DataBroker DAO token sale structure? DataBroker welcomes everyone on their slack or telegram channel to ask questions and discuss the platform & token sale with the team.

Facebook
Twitter
Pinterest
WhatsApp
Previous articleCrypto Valley Association Comes Out in Support for Careful ICO Regulation; Announces ICO Code of Conduct
Next articleAhoolee Shopping Search Engine Plans Token Sales
Richard Kasteleinhttps://www.the-blockchain.com
In his 20s, he sailed around the world on small yachts and wrote a series of travel articles called, 'The Hitchhiker's Guide to the Seas' travelling by hitching rides on yachts (1989) in major travel and yachting publications. He currently lives in Groningen, the Netherlands where he has set down his anchor to raise a family and write. Founder and publisher of industry publication Blockchain News (EST 2015) and director of education company Blockchain Partners (Oracle Partner) – Vancouver native Richard Kastelein is an award-winning publisher, innovation executive and entrepreneur. He has written over 2500 articles on Blockchain technology and startups at Blockchain News and has also published in Harvard Business Review, Venturebeat, Wired, The Guardian and a number of other publications. Kastelein has an Honorary Ph.D. and is Chair Professor of Blockchain at China's first blockchain University in Nanchang at the Jiangxi Ahead Institute software and Technology. He has over a half a decade experience judging and rewarding some 1000+ innovation projects as an EU expert for the European Commission's SME Instrument programme as a startup assessor and as a startup judge for the UK government's Innovate UK division. Kastelein has spoken (keynotes & panels) on Blockchain technology at over 50 events in 30+ cities.