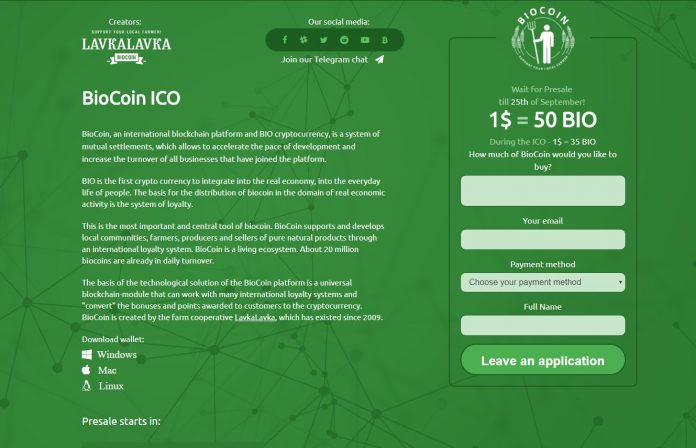 LavkaLavka, an international eco-farming and retail network, has announced a crowdsale of integrated crypto platform BioCoin. The Presale will start on September 25, 2017 and last for two weeks. The main round of tokensale will commence on November 1, 2017.

In a nutshell, BioCoin is an international Blockchain-based loyalty platform, created to facilitate the eco-friendly and healthy agricultural paradigm around the world. As a combination of cryptocurrency and loyalty platform, BioCoin is designed to support local farmers and organic food retailers and allow them to return value into their communities via a system of rewards and discounts.

BioCoins will be used by businesses instead of traditional loyalty reward points as an encouragement for every purchase made within the BioCoin network.

Customers will then be able to use BioCoins as currency in any affiliated store or trade them at the exchange at a more favourable rate. The founders expect growing demand to drive up the price of BioCoin and thus businesses will not suffer losses as a result of discounts but actually accumulate value. In the end, their ambition is to create a financial instrument aimed at supporting ecological farming and green economy locally and generate value for farmers, retailers and customers globally.

LavkaLavka has already built a foundation for BioCoin’s ecosystem creating an international farmer cooperative LavkaLavka. Today LavkaLavka is backed by tens of thousand of consumers, retailers and farmers worldwide and its base is steadily growing. According to LavkaLavka team, about 20 mln BioCoins are already in daily circulation, used by farmers in Russia and several other countries.

“We have just started but we’ve already attracted dozens of businesses – UAZ automobile factory, DoubleB coffee shop network, hotels on Bali and Archangelsk and big manufacturers of soda drinks and biofertilizers. We’re growing quite rapidly. The preliminary round of presale was conducted in late August, before we even got the site fully operational. We’ve sold almost 30 mln BIO, which amounts to almost $435,000.” said Boris Akimov, cofounder at LavkaLavka

Out of a billion BioCoins that will be issued, 800 mln will be sold during the ICO campaign while the rest will be reserved for marketing needs, bounties and salaries. The team hopes to gather at least $20 mln overall.