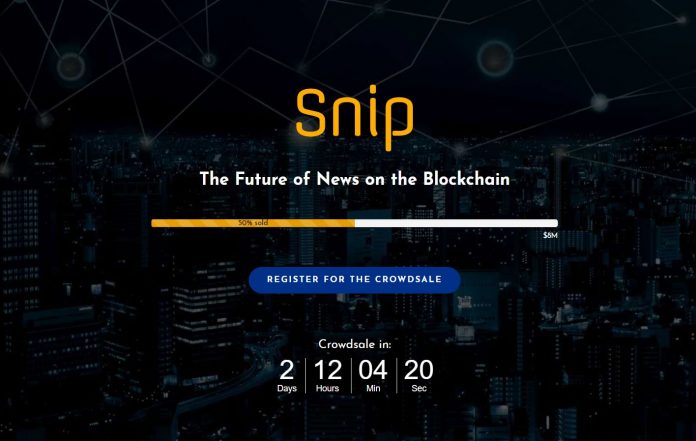 Snip, a project that develops a decentralized media outlet edited by the community of users, has announced its partnership with Bancor and its joining to the Bancor Decentralized Liquidity Network.

“This partnership is a big step in making SnipCoin easier to use and in encouraging buyers to hold the token and use it inside the Snip ecosystem. At Snip we’re focused on buyers and partners who are true believers in the Snip platform and we’ve found the Bancor team to be an excellent partner and advisor. We’re now looking forward to expanding beyond the core team and engaging the thriving Bancor community,” the Snip team wrote on their official blog.

Bancor is an Ethereum-based platform for decentralized exchange of ERC20 tokens. Back in June, the project managed to raise 396,720 ETH over just a few hours after its crowdsale has commenced.

Snip, on the other hand, is yet to hold its own crowd sale, however, it managed to raise over 13,000 ETH (nearly $4 million at the time of writing) over its presale campaign so far. Their crowdsale will kick off September 29th.

Snip creates a decentralized news outlet where every user could create so-called Snips, which are essentially brief news stories on any topics. Other users use SnipCoins to vote for the texts, and thus exercise their editorial power while rewarding creators of high-quality content.

“Bancor is built to enable user-generated online economies to thrive by allowing them to focus on their content and value propositions while the protocol handles liquidity and pricing. Snip is a great example of just such an ecosystem, aiming to empower members to create and consume high integrity news in a decentralized way. We are excited to see more consumer applications utilizing these important technologies,” said Eyal Hertzog, Co-Founder and Head of Product at Bancor Network.

Additionally, Snip partnered with Matchpool, a decentralized matchmaking platform that offers users to create pools focused on any common interests while financially rewarding creators of such pools. The partnership implies that anyone who refers Snip writers to Matchpool will get 100,000 SnipCoin as a reward once they have published their first post.

Snip has reached a strategic partnership with CoinTree Capital which has already backed several prominent blockchain-focused companies like Stox and Kik.