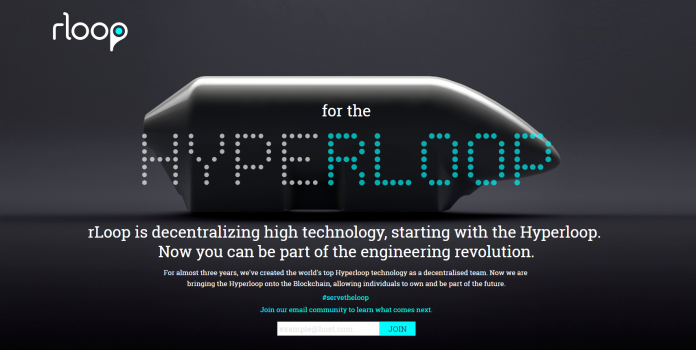 The rLoop community is moving on to the Blockchain and planning to launch an ICO.
Since their founding on Reddit almost three years ago, rLoop has created the world's top Hyperloop technology as a decentralised team. Now, the team is planning to scale their designs and manufacturing to realise their full scale plans. While they could seek the necessary capital from traditional routes, instead they plan to launch the first advanced engineering ICO in history; enabling anyone to collaborate on and own a piece of the Hyperloop.

The Blockchain presents an entirely new and disruptive way of doing business, enabling organisations to build decentralised networks without the middlemen gatekeepers of yesterday. rLoop is convinced that their model represents the future of work, and that it will change the world.

“At rLoop we have successfully been able to mobilise, organise, and incentivise a globally distributed community that wants to invest their time and resources to create radical change. The logical progression for our decentralised team is onto the blockchain, and the Hyperloop is only the beginning.”

“Our plan has been derived from the experiences, ideas and passion of our members who have over the last few years put their time and effort into our journey and the success we have had to date.  We are creating an engineering revolution as a decentralised team. We are united by a shared goal of radical technological breakthroughs for the benefit of humanity.”

By taking rLoop onto the Ethereum Blockchain, the team will solidify and expand its culture and collaborative processes by leveraging smart contract systems, enabling any individual to take part in an engineering revolution. The time to revolutionise transportation and bring the world closer together is here.

To learn more about what comes next, and to be part of the engineering revolution, start by registering your interest at www.rloop.org #servetheloop