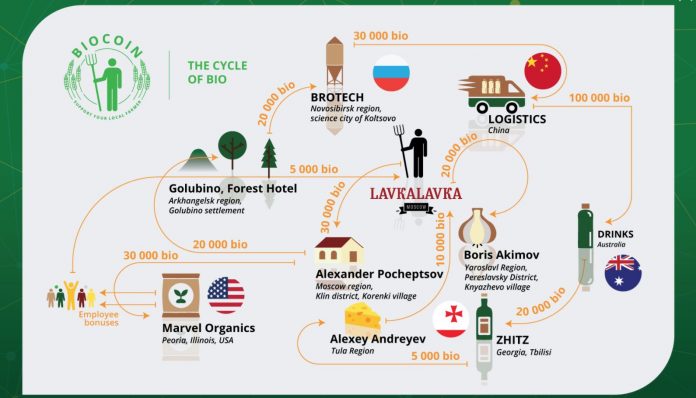 International eco-farming and retail network LavkaLavka announced that BioCoins’s presale has concluded its first round with spectacular success. In just two weeks thousands of people participated in the crowdsale and purchased $2.5 mln worth of BioCoins. The team reports that this sum is twice as large as what they initially hoped for and constitutes 13% of the crowdsale’s goal which was set at $15 mln.

“Often the concept of presale is used by startups as a PR stunt only. For us presale was tremendous work which yielded great results.” – Boris Akimov, CEO LavkaLavka

BioCoin is basically an international Blockchain-based loyalty platform, aimed to support eco-farming and organic food retailers worldwide. BioCoins are to be used by green businesses instead of traditional loyalty points as a means of customer loyalty encouragement. BioCoins will then be accepted as currency in any affiliated store. Alternatively they can be traded at the exchange at a more favourable rate.

The founders expect the demand for the coin to grow steadily as the network itself continues to grow. This growing demand will drive BioCoin’s price up and thus businesses will not suffer losses as a result of discounts and rewards but actually accumulate value. By giving away BioCoins back to the customers as rewards and bonuses, businesses will return value into their communities triggering the growth cycle for the entire ecosystem.

Today LavkaLavka and BioCoin are backed by tens of thousands of consumers, retailers and farmers worldwide, new businesses joining the network weekly. According to LavkaLavka team, about 20 mln BioCoins are already in daily circulation, used by farmers in Russia and several other countries.

Notably, BioCoin pioneers the market as the first ICO held in full compliance with Russian laws. As Presidential Administration has recently recognized the potential of crowdsale funding model, project’s CEO was invited to head the ICO department at RACAB (Russian Association of Cryptocurrency And Blockchain) whose purpose is to help the Russian state develop a new approach to the industry. BioCoin is named a probable staple project for the future of Russian ICO market regulations.

The main round of crowdsale is scheduled to start November 1. It will be hosted by the first official Russian cryptocurrency platform Voskhod.

Facebook
Twitter
Pinterest
WhatsApp
Previous articleeSports Platform EloPlay to Hold a Token Sale
Next articleFiinu Launches Pre-sale Ahead Of ICO
Richard Kasteleinhttps://www.the-blockchain.com
In his 20s, he sailed around the world on small yachts and wrote a series of travel articles called, 'The Hitchhiker's Guide to the Seas' travelling by hitching rides on yachts (1989) in major travel and yachting publications. He currently lives in Groningen, the Netherlands where he has set down his anchor to raise a family and write. Founder and publisher of industry publication Blockchain News (EST 2015) and director of education company Blockchain Partners (Oracle Partner) – Vancouver native Richard Kastelein is an award-winning publisher, innovation executive and entrepreneur. He has written over 2500 articles on Blockchain technology and startups at Blockchain News and has also published in Harvard Business Review, Venturebeat, Wired, The Guardian and a number of other publications. Kastelein has an Honorary Ph.D. and is Chair Professor of Blockchain at China's first blockchain University in Nanchang at the Jiangxi Ahead Institute software and Technology. He has over a half a decade experience judging and rewarding some 1000+ innovation projects as an EU expert for the European Commission's SME Instrument programme as a startup assessor and as a startup judge for the UK government's Innovate UK division. Kastelein has spoken (keynotes & panels) on Blockchain technology at over 50 events in 30+ cities.