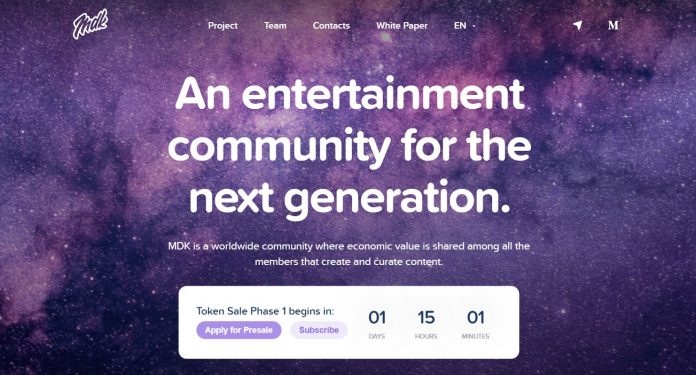 The entertainment platform MDK, represented by popular communities on Vkontakte, Telegram, Twitter, YouTube, and Instagram, will be conducting the first phase of its ICO November 7–28, 2017.  MDK will be creating a new mobile app and its own blockchain project that would allow its followers to create posts and help with moderation, receiving MDK tokens as compensation. In all the company plans to raise $1 million.

An Ethereum-based blockchain platform will be integrated with mobile apps on iOS and Android that allow users to view, post, and edit audio, video, and photos. Compensation will be given to the authors of the most popular posts and to the most active moderators, which will positively effect motivation.  A new approach will be taken to attract new users, advertisers, and business in general, which should result in daily growth in the token’s value.

Also in the works are gamification and user rating features, which will encourage authors to get involved in the process. If they so choose, users will be able to spend tokens directly in the app on customized profiles or premium content. In addition to advertising, business representatives will be able to sponsor themed channels, organize various contests, surveys, and studies, and access a marketplace of goods and services.

The founders of the MDK project, which reaches approximately 30 million people, are Roberto Panchvidze and Dmitry Aladyshev, who have many years of experience with doing business in the entertainment industry. Dmitry Aladyshev has been a successful serial entrepreneur since 2010 and is an expert in creating popular media and strategies for developing popular communities. Roberto Panchvidze has been managing the day-to-day operations of the entire MDK group for over 4 years.

The second phase of token sales is planned for the first quarter of 2018.