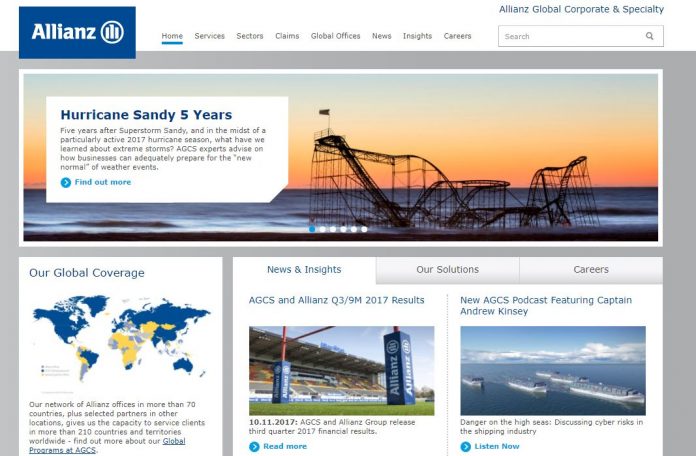 “We are currently seeing many Blockchain applications in the financial services industry and are eager to explore the potential of this exciting technology in the corporate insurance segment,” explains AGCS Board Member Hartmut Mai. “The captive Blockchain prototype is one further example of our commitment to leverage new technologies and drive innovation in insurance.”

Captive insurance programs are one of the most complex areas of commercial insurance. They are established by multinational organizations that self-insure instead of purchasing insurance. They create their own self-insurance programs or ‘captives’ that pool together selected assets or insurance exposures from their global operations, collecting premiums from each of their operating companies and paying out claims internationally as they arise. These captives may cover over 100 countries and hundreds of millions of dollars of insured assets. As a “fronting insurer” Allianz partners with the captive owner to administer each program, using the insurer’s international network in 210 countries and territories to fully comply with local regulations.

Blockchain technology automatically connects all parties involved in the captive insurance program – the captive management, local subsidiaries and the fronting insurer. Blockchain is a distributed ledger which is shared among a network of participants and can record transactions and data entries. Any updates or changes to the data are shared in real-time across all users. This creates a much faster, transparent, secure and efficient means of distributing information, conducting business processing and recording transactions across multiple parties.

The Allianz captive insurance Blockchain prototype, built on the Blockchain framework Hyperledger Fabric 1.0, focuses on two types of insurance policies – Professional Indemnity and Property – for a captive insurance program with local subsidiaries in the US, China and Switzerland. The prototype looks at three common process flows in the captive insurance cycle – annual policy renewals, premium payments and claims submission and settlement. It translates these processes into the distributed ledger environment decreasing the time from start to policy, policy to premium and claim to settlement.

“Our captive insurance Blockchain prototype demonstrates that regular transactions and cash transfer between fronting insurers and clients can be significantly accelerated and simplified,” says Yann Krattiger, Principal at ART. “Automated processing replaces the exchange of thousands of emails and massive data files. Each process is transparent and can be tracked in real-time. Our customers benefit from increased speed, reliability and auditability.”

“The captive insurance Blockchain prototype is a prime example of EY’s approach on co-innovating with our clients. It allowed us to demonstrate and trial the power of distribution and decentralization in the transformation of the insurance industry, using the Hyperledger Fabric Composer toolset to achieve fast and flexible prototype results. The project deepened our and our client’s understanding of how applied Blockchain technology will not only fundamentally change insurance as we know it but also create new business models.”

“Citi is very proud to have been able to help Allianz achieve this industry milestone. By leveraging innovative, new technologies such as Allianz’s Blockchain prototype and CitiConnect API, we are able to partner to design new business models and rapidly implement them in a matter of weeks,” said Tapodyuti Bose, Global Head of Channel, Enterprise and Account Services, Citi Treasury and Trade Solutions.

The digital agency Ginetta designed the intuitive, convenient user interface that incorporates the requirements of ART and its captive client. It visualizes core processes, and through real-time information allows tracking their progress by all relevant stakeholders around the world. Before creating the user interface all processes of captive insurance management have been reviewed, redefined and radically simplified. “With Blockchain much focus is put on the technology, yet in reality perhaps 10 percent of the work is related to technology. The other 90 percent is rethinking the underlying processes and these in the end are all about people,” says Alan Cabello, Project Lead and Innovation Manager, AGCS Central and Eastern Europe.

Click here to watch a short video which explains the Allianz Blockchain solution for the captive insurance market in short: http://www.agcs.allianz.com/services/captive-services/Blockchain-prototype