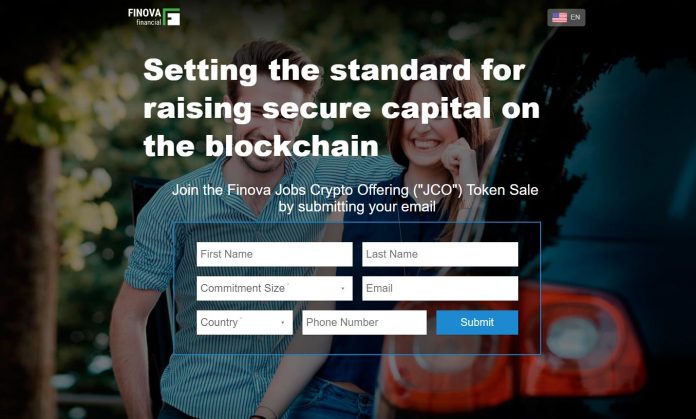 Finova Financial, a digital financial services provider transforming the future of global banking, announced today the creation of a fundraising process known as a JOBS Crypto Offering (JCO) which, when completed, will give investors the opportunity to invest in equity ownership of previously privately-held companies using cryptocurrency.

The JCO is the brainchild of serial fintech entrepreneur, Gregory Keough, who is the current CEO of Finova Financial and former CEO of Mobile Financial Services, a MasterCard and Telefonica Joint Venture for mobile financial services globally.

“I liked the idea of the ICOs when they were first introduced as they looked like an exciting way for startups to raise funds from small investors, but I had concerns about regulatory compliance practices, especially for tokens that are clearly securities,” noted Finova CEO, Gregory Keough. “I designed the JCO as a process to open the doors of opportunity for the small investor, allowing them to participate using cryptocurrency in security offerings in compliance with SEC regulations. I envision the Tokens sold in JCOs being listed on an Alternative Trading System, creating a liquid security and providing companies with an alternative to a traditional initial public offering.”

“We think the JCO has the potential to have a massive impact on the way startups raise funds, while creating some much-needed regulatory clarity in the crypto-investing space,” said Sheel Mohnot, Partner, 500 Startups.

JCO: How it Works

The JOBS Crypto Offering (JCO) is a new financing process that allows for companies to issue securities to the general public in exchange for cryptocurrency or other funds in compliance with SEC regulations. Ownership of such securities would be represented by entries in a distributed electronic network or database maintained by or on behalf of the Company in accordance with Section 224 of the Delaware General Corporation Law, which we refer to as Tokens. The Tokens would be listed on an Alternative Trading System that is compliant with Regulation ATS under the Securities Exchange Act of 1934, as amended.

*About the JOBS Act

Working to transform the future of banking on a global scale, National Financial Holdings, Inc. (known as “Finova”) develops fair and affordable digital financial technologies to create a more inclusive financial system and provide a path to financial health for the two billion people outside of the traditional financial system. Founded in 2015 by a team of financial services, technology, and payment experts, Finova is backed by leading Silicon Valley venture capital firms and Wall Street private equity investors.

Facebook
Twitter
Pinterest
WhatsApp
Previous articleDash Transactions Now 215 Times Cheaper Than Bitcoin After New Network Upgrade
Next articleBinary.com Announces ICO
Richard Kasteleinhttps://www.the-blockchain.com
In his 20s, he sailed around the world on small yachts and wrote a series of travel articles called, 'The Hitchhiker's Guide to the Seas' travelling by hitching rides on yachts (1989) in major travel and yachting publications. He currently lives in Groningen, the Netherlands where he has set down his anchor to raise a family and write. Founder and publisher of industry publication Blockchain News (EST 2015) and director of education company Blockchain Partners (Oracle Partner) – Vancouver native Richard Kastelein is an award-winning publisher, innovation executive and entrepreneur. He has written over 2500 articles on Blockchain technology and startups at Blockchain News and has also published in Harvard Business Review, Venturebeat, Wired, The Guardian and a number of other publications. Kastelein has an Honorary Ph.D. and is Chair Professor of Blockchain at China's first blockchain University in Nanchang at the Jiangxi Ahead Institute software and Technology. He has over a half a decade experience judging and rewarding some 1000+ innovation projects as an EU expert for the European Commission's SME Instrument programme as a startup assessor and as a startup judge for the UK government's Innovate UK division. Kastelein has spoken (keynotes & panels) on Blockchain technology at over 50 events in 30+ cities.