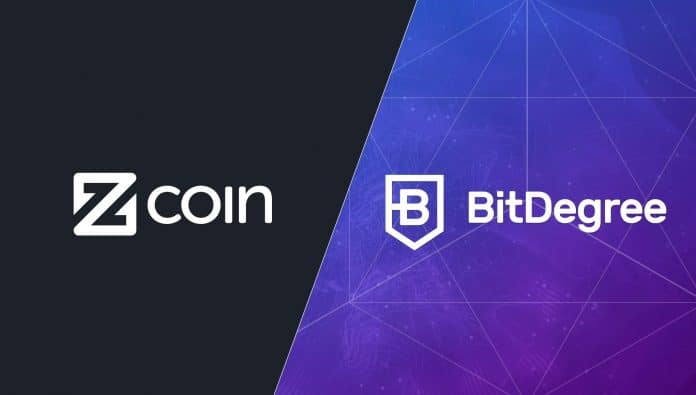 Decentralized education platform BitDegree has announced that it is collaborating with Blockchain-based peer-to-peer cryptocurrency Zcoin (XZC) to develop a course about the Zerocoin protocol and the cryptography behind it. The target audience for the jointly-created upcoming cryptography course is C++ developers. It will run on the BitDegree platform.

BitDegree is a pioneering decentralized education platform, which will revolutionize education by offering Blockchain-powered IT and tech courses. It was created by the founders of Hostinger and 000webhost, one of world's largest free web hosting platforms.

Zcoin is based on the academic paper of the Zerocoin protocol. It differs from a number of other cryptocurrencies in that it offers privacy through the use of an inbuilt protocol that allows users to remove transaction history of coins. This process involves burning up coins and redeeming a brand new coin with no transaction history by producing a zero-knowledge proof. It does this while retaining auditable coin supply and using venerable cryptography techniques such as RSA accumulators and the Fiat-Shamir transform.

As part of the agreement, Zcoin has also agreed to invest up to $20,000 USD in the BitDegree scholarship pool. This will allow BitDegree and Zcoin to collaboratively raise awareness surrounding Blockchain technologies, and globally promote Blockchain-based education.

“Zcoin is one of the pioneers of using Blockchain technologies with cryptocurrencies. Working together to create a cryptography course is a huge step for BitDegree in establishing itself as a strong decentralized education platform, as well as a promoter of Blockchain-based education and technologies.”

“Zcoin is extremely excited about its new partnership with BitDegree. We are sure that our jointly-created cryptography course, plus BitDegree’s approach to education of giving learners the chance to “earn whilst they learn” will revolutionize education. We believe that our combined efforts in promoting Blockchain will also lead to decentralized education becoming “the new normal” in the future.”

In October 2017, BitDegree joined the Enterprise Ethereum Alliance and the Bitcoin Foundation as part of its campaign to adopt best practices from internationally-operating companies who promote the use of Blockchain and cryptocurrencies.