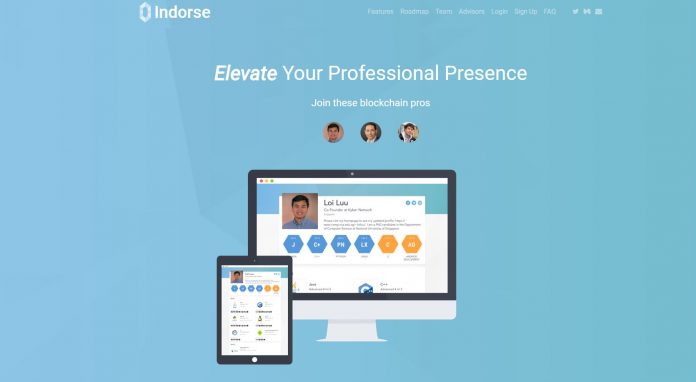 Indorse, the decentralized social network for professionals, has announced a strategic collaboration with AppCoins, the first ever token sale serving 200 million active users, supported by the Aptoide App Store.

The collaboration comes before Indorse’s MVP launch later this month and will see both companies working together to share data between their individual user reputation systems. This will allow Indorse users to verify the ownership of any app on Aptoide App Store and will let Aptoide users check an Indorse developer’s reputation.

Aptoide is creating the first cryptocurrency for app stores, AppCoins, which is set to become an open protocol adoptable by any app store, addressing the main inefficiencies of the app economy, such as mobile advertising, in-app billing and app approval. AppCoins aims to create a more transparent and secure app approval process and will collaborate with Indorse  on its developer reputation system.

Within the scope of the partnership, all Indorse investors will be granted access to the exclusive pre-sale of AppCoins, which will close on November 20, 2017.

“From the start of our journey, it has been our aim to provide users with benefits that current social network sites are denying them, such as data ownership, privacy, and security. In order to take on the leaders in this space, we require a strong network of partner platforms utilizing the reputation system and AppCoins is one of them.”

Unlike traditional platforms, Indorse is building a serverless, decentralized network where professionals have full control over their own data as they build their professional profiles and share skills on the platform, benefiting from the platform growth and data insights rather than third parties. Through participation in the platform, members of Indorse are able to earn rewards for sharing more about themselves and for “indorsing” the claims of others.

Indorse completed its token sale, raising approximately USD 9 million in September, 2017. Since then the team have worked towards the rollout of the platform; the first release, which takes place later this month, will see the launch of the CV visualizer and the main profile page.

“We believe that the collaboration with Indorse will be beneficial for both the platforms, since AppCoins can benefit from Indorse’s reputation system to validate the profile of new Android developers and, on the other hand, all the apps uploaded to Aptoide can be an additional data point for Indorse to validate someone’s skills”.

With AppCoins, users can earn tokens through engaging with app advertising and then spend this currency on in-app purchases (such as game items  and upgrades). Users who currently lack access to traditional payment methods will gain a chance to buy items that were previously inaccessible. In addition, a blockchain ledger will record all developers’ reputations, increasing the reliability of apps in the marketplace. In addition to the greater user engagement potential, the model removes the need for payment or advertisement intermediaries. This promises greater return on investment and increased monetization potential for developers.

AppCoins’ potential extends beyond the Aptoide platform, as the tokens will be made compatible for all app stores. With that in mind, an App Store Foundation will be created to coordinate the development of the protocol and reference implementation under an open governance model.

For more information on this collaboration, visit www.indorse.io and https://appcoins.io/