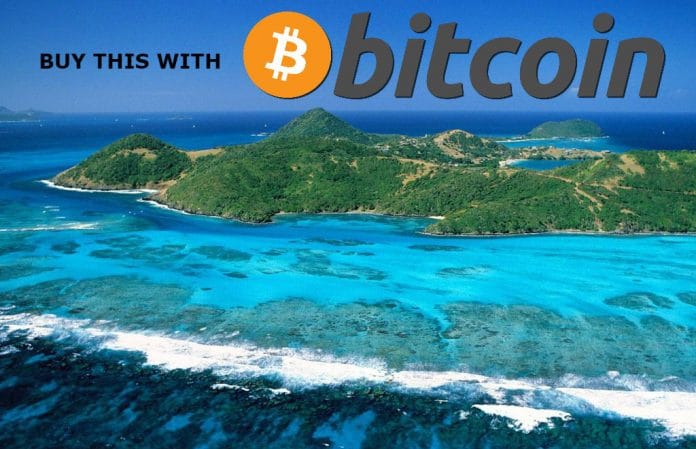 The tropical hideaway, which can be seen at www.bloodybaybeach.com, is on Union Island in St Vincent and the Grenadines and is being offered for a cool 600 Bitcoins – the equivalent of around £4.4 million at today’s rate*. Serious buyers can put in their email address and a representative will contact them directly.

Whilst the price tag may exclude many from the sale, the meteoric rise in the value of Bitcoin means someone with just £440,000 worth of Bitcoins at the start of 2017 would be able to afford to buy the land today.

The land, which runs down to the beautiful white sands of Bloody Bay, comes with plans to build a stunning villa and beach bar, and is within a few minutes of a small airport linking Union Island with St Vincent and the other Grenadine islands.

The award winning architect Seth Stein has also drawn up plans for a collection of luxury cabins should the new owner wish entertain visiting friends and family.

The new owner will be investing in one of the property hot-spots of the Caribbean. Huge sums are being spent in developing the local infrastructure and turning the region into a luxury holiday destination.

On the neighbouring Canouan Island, more than £150m has been spent by the owners of the famous Sandy Lane resort in Barbados on developing the luxury Pink Sands Club. They’ve also added a 6,000ft runaway- the longest in the Grenadines – and a multi-million dollar superyacht marina.

Whoever buys the Bloody Bay site will be setting up home on an English-speaking island with just 3,000 inhabitants and the occasional visit from superyacht owners, sailors and divers who prize the crystal clear waters and pristine beaches.

The Grenadines are rich in history from the era of pirates to the darker days of slavery. In fact, neighbouring Tobago Cays were chosen as the location for the filming of some scenes from The Pirates of the Caribbean.

A quick boat trip would take the buyer to Mustique – the private island made famous by the likes of Princess Margaret, Mick Jagger, Bryan Adams, David Bowie, Tommy Hilfiger and Felix Dennis.

Venture slightly further afield and they would arrive at Necker Island which belongs to the Bitcoin enthusiast Sir Richard Branson.

A spokesperson for the Bloody Bay Company selling the land said:

“Someone wise or brave enough to have got in early on the cryptocurrency phenomenon could soon be lifting their rum cocktails to toast the bargain of the century.”

Serious offers can be made through the contact page at www.bloodybaybeach.com.