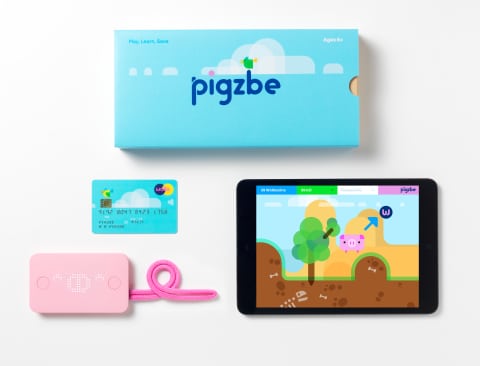 The entrepreneurial designers behind popular learning tools Cubetto and the Kano Computer today announced the upcoming release of Pigzbe – a digital currency piggy bank for children and families. Developed by Filippo Yacob, who featured in Forbes’ 30 Under 30 and is the creator of Facebook supported Cubetto, with support from Jon Marshal of educational Kano Computer fame, Pigzbe blends cryptocurrency with gaming to teach kids the power of earning, saving, and spending in a post-cash society.

“Learning about money early is key to developing positive financial habits, but it will be impossible to do in an increasingly cashless society, and with current banking products,” said Pigzbe CEO Filippo Yacob, in a statement. “When I looked for digital piggy-bank apps for my own son, I couldn’t find anything that would allow me to make small payments – even 1p [GBP 0.01; USD 0.014] or 2p at a time – let alone cross-border. Most digital piggy bank apps would charge me 50p just to send 50p! And it seemed wrong to me that cross-border transfers were not possible at all. Families today are globalised. It is common to have grandparents, uncles and aunts living in separate countries. They should all be able to partake in the ‘piggy-banking’.”

Pigzbe pairs with an app that allows families to transfer as little as GBP 0.01 using the integrated Wollo cryptocurrency, designed to be used as a small reward for daily household chores or as pocket money. Pigzbe will also include a connected payment card, enabling families to spend their accumulated Wollo in many different currencies.

Pigzbe Head of Product Jon Marshall added, “What really excites me personally about Pigzbe is the combination of the Internet of Things (IoT), gaming, and teaching kids about something — in this case, digital money, saving, microfinance and the potential of cryptocurrencies, which is something everyone is going to have to learn about. Combining these into one single product, and being involved in an ICO that offers hardware and tokens as a world-first, is very exciting. Many people don’t understand blockchain or cryptocurrency, and the reality is that we probably don’t need to understand it, we just need to understand the benefits. Pigzbe is one of the first products that is going to build on the benefits of blockchain in a way that feels trustworthy and friendly for families and hopefully that will lead to more people not just understanding more about it, but feeling comfortable using it.”

Based in London, Pigzbe plans to launch a crowdsale in May and June 2018 that will allow early adopters to acquire a Pigzbe wallet and a small amount of Wollo.

Facebook
Twitter
Pinterest
WhatsApp
Previous articleProxeus Reaches Major Milestone in Registering Company via Blockchain Tech
Next articleVirtual World Developer MARK.SPACE Secures $11M From New Strategic Investors
Alex Behrens
Alex started his professional career in a data analyst role at a global electrical components distributor before transitioning to work in the blockchain industry full time in 2017. He has performed research and analysis on multiple projects including traditional securities and cryptocurrencies, and has contributed to operational design for cryptocurrency mining and other entrepreneurial projects since 2015. Alex graduated from Ithaca College in 2014 with a BS in Finance and a minor in Politics.