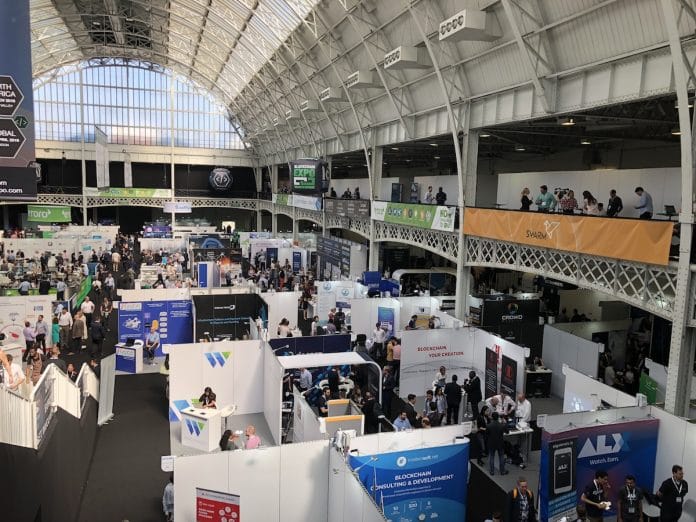 The blurring of the lines between blockchain, artificial intelligence (AI) and the internet of things (IoT) was never so pronounced as at Blockchain Expo Global 2018 which took place in London last week.  Co-located with IoT Tech Expo and AI Expo at the imposing Olympia exhibition centre, in terms of floor space covered and event activity, the blockchain element of the conference looked to be outpacing these complimenting technologies. Conference pre-registrations were in excess of 21,000 for the two-day event.

Event Director, IoT Tech Expo, AI Tech Expo & Blockchain Expo Series, Richard Blythe, while reluctant to use the words “it’s taken over”, remarked on how quickly the blockchain part of the conference was encroaching on the AI and IoT sections, and said that the crossover appeared to be working well for people.

“It’s been a large part of this year’s event and it’s been very popular, to the point where it’s had a snowball effect,” he stated. “The last two or three months has really seen the maximum impact for the industry.”

And the industry was out in full fettle, with a frenzy of pitching activity and besuited, traditionally attired execs mingling with pony-tailed developers and on-trend consultants. The throng of activity inside belied the fact that, outside, London was bathed in unseasonably glorious and blistering sunshine – it was, in fact, the hottest April 17 on record.

Hotter inside than out

Ignoring the weather, conference attendees were, instead, turning up the heat inside the arena.

As Managing Editor of Blockchain News, I was invited to Chair the (free to attend) Developing Applications track, a showcase for just a few of the new startups and applications using blockchain technology. Some of the standout talks included: ‘Developing smart contracts in C# using Stratis’, by rockstar developer Jordan Andrews; Breanna Faye, Architect and Experience Design Lead, rLoop, who spoke enticingly on how, with blockchain, we can all work together to design the Hyperloop, jet packs and the factories of the future, and MATRIX’s Chief AI Scientist Steve Deng on how AI enhances blockchain.

‘Blockchain technology from the investor’s perspective: A VC view of the marketplace’, the panel I moderated, gave rise to further insights on the role of AI, the IoT and blockchain “The Convergence  Ecosystem”, as described by Outlier Ventures’ Lawrence Lundy.

In this session, Lundy, together with other leading venture capitalists and investors, dissected the emerging blockchain technology landscape and took a look at how blockchain companies are creating disruptive solutions to real-world problems. With audience interaction a priority, some excellent points were raised. But it was the last question that had the VC’s squirming: “If you had to name just one truly innovative company, who would that be? Two of our panellists gave their vote to pioneering blockchain alternative, Hedera Hashgraph.

“Key takeaways from three panels in last two days:
– the amount of money getting invested into blockchain tech will continue to rise
– enterprise adoption to go from experimentation to large scale deployments
– IoT and blockchain are going to become best friends
– will see a rise in security tokens
– will see a rise in asset backed tokens
Oh and don’t screw with the SEC.
#blockchain #swarmfund”

Up high above the conference floor, the Gold Member’s balcony area was marginally less high-energy, if not much cooler. It was a good opportunity to get some attendee viewpoints on the conference.

“The mood here reflects what’s actually happening. We’re in a bear market but there are a lot of new entrants coming though,” stated Galen Moore, Director of Market Research at New Alchemy. “It’s my job to know every token and crypto service provider there is and there are still dozens here I hadn’t heard of. It’s exciting  – some of the platforms that are being developed. Like Decred, which is getting ready to propose an alternative to Ethereum, complete with a developer fund.”

Data Analytics & Groupware Evangelist Pascal Lauria also said he was impressed by the community turnout and had spotted several influencers, including Nick Ayton and Thomas Power.

“This is the biggest blockchain conference in the world and it’s great to come together for real-world interactions and meet all the people I talk to online,” said Lauria. “The mood is bullish after the market being so beaten down. We’re back to the USD 350 million market measurement.”

But according to Richard Blythe, there were just as many newbies as experts, “I think there’s a lot of people here interested in learning as well,” he said. “To really take in blockchain.”

For those less interested in networking and more taken with the presentations, the organisers reported that the best-attended tracks were Cryptofinance and ICO strategies & Blockchain for Enterprise.

Jeremy Millar, Founding Board Member of the Enterprise Ethereum Alliance, provided the first Keynote, on the need to move towards common blockchain standard. The impact of blockchain in the banking model, by Roberto García, Head of Blockchain IT, Isban Global (Santander bank), was the second day’s keynote.

But those wanting to return to London’s Olympia next year for more of the same will be disappointed. Organiser, Richard Blythe confirmed that the event will not take place at the Olympia National next year. Instead, the event will be moving down the road, to the Olympia Grand, with a larger conference arena to accommodate even more delegates, commensurate with the growing interest in blockchain technologies.

If you missed Blockchain Expo Global, registration is now open for Blockchain Expo Europe 2018, which takes place in Amsterdam on June 27 and 28, 2018. The event’s award ceremony, The Blocks, has extended its nomination deadline to May 4, 2018.