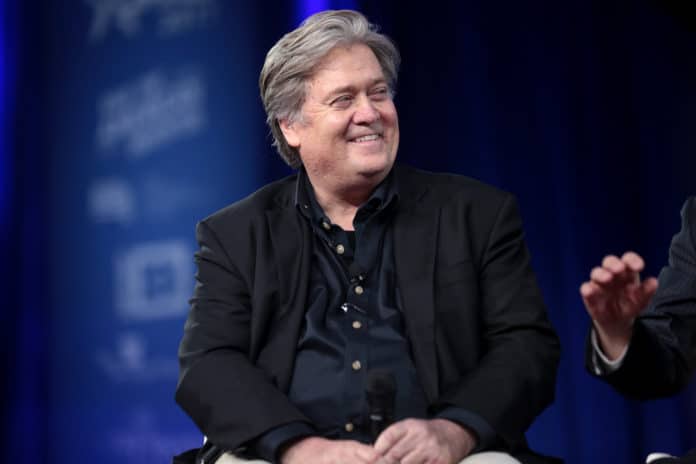 Bannon was first introduced to digital currency by Brock Pierce, who started Hong Kong-based company Internet Gaming Entertainment (IGE), which sold virtual gold to World of Warcraft players. Bannon was brought on as vice chairman of the company from 2005 to 2007.

After leaving IGE, Pierce dabbled in a number of digital currency ventures, including efforts to establish a cryptocurrency enclave in Puerto Rico, as well as EOS — a virtual currency that has raised over USD 3 billion.

Then, in 2016, Bannon’s crypto efforts were put on hold as he went to work for the 2016 Trump Presidential Campaign.

After a year’s work as chief strategist in the White House, Bannon left, amid controversy, on August 18, 2017, surrounding his unflattering descriptions of Trump et al in Michael Wolff’s “Fire and Fury.” In January 2018, Bannon was ousted from Breitbart News, an alt-right media outlet he had co-founded in 2007.

Now, after a ten-month interlude, Bannon has returned to the cryptosphere. According to The New York Times, Bannon has been working at all hours with investors and hedge funds in order to build ICOs under his investment firm, Bannon & Company.

ICOs are a method of funding for new crypto token startups wherein investors can send in funds that will be exchanged for the new coins. In the past, ICOs have proven to be extremely risky, with one report estimating that roughly 80 percent of all ICOs are scams. The US Securities Exchange Commission has frequently published warnings to investors on ICOs, as well.

According to the NY Times, Bannon has not given any specifics on his pet projects out of fear that his name may tarnish them before they are able to get their feet off the ground. However, he has been outspoken in the political motivations behind his work in cryptocurrency.

At Harvard University in Spring 2018, Bannon also dangled the idea of creating a token named after Clinton’s description of Trump supporters — “a basket of deplorables” — that would be called the “deplorables coin.” It certainly wouldn’t be the first politically-named cryptocurrency, as “TrumpCoin” has already been dedicated to assisting the US President to “Make America Great Again” in 2016.

Bannon’s anti-government, populist political ideology remains in line with cryptocurrencies’ historically libertarian nature. “It was pretty obvious to me that unless you got somehow [sic] control over your currency, all these political movements were going to be beholden to who controlled the currency,” Bannon told the NY Times.