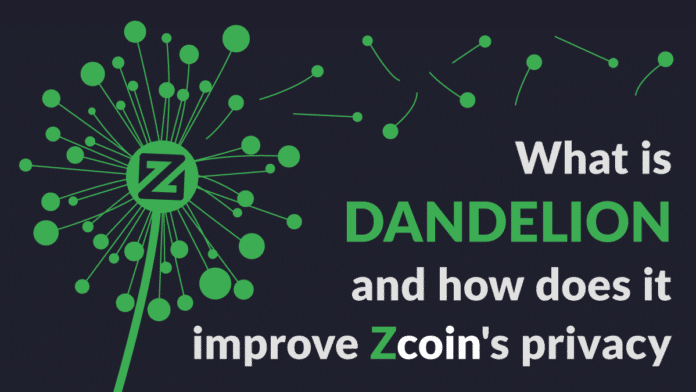 Top 100 cryptocurrency Zcoin (XZC) – a popular privacy coin has announced they are the first to implement “Dandelion” to ensure more transactio privacy on the blockchain.

Dandelion – the work of researchers from Carnegie Mellon, MIT and the University of Illinois – Giulia Fanti, Shaileshh Bojja Venkatakrishnan, Surya Bakshi, Bradley Denby, Shruti Bhargava, Andrew Miller and Pramod Viswanath – is a service that provides network privacy which further conceals the IP address of someone broadcasting a transaction on the blockchain.

“We’re excited to be adding yet another layer of privacy to reduce the likelihood of any linkability to personal information like IP addresses to transactions,” said Reuben Yap, COO of Zcoin on the integration of Dandelion to Zcoin.

“There is a lot of sensitive information in people’s financial transactions, so it’s important to ensure that their data can’t be exploited by malicious agents, especially given the public nature of cryptocurrencies. Dandelion protects users from adversaries who might try to link their cryptocurrency transactions to an IP address,” said Giulia Fanti, assistant professor of Electrical and Computer Engineering at Carnegie Mellon University.

Zcoin are the the pioneers of the Zerocoin protocol which ensures private financial transactions using zero-knowledge cryptographic proofs. To protect the anonymity of transactions, users are able to destroy their Zcoins and mint new ‘clean’ coins with no transaction history tied to it.

Although Zcoin has Tor integration which helps users hide their IP addresses, Dandelion adds an additional layer of protection. What’s more, it also protects those who do not want to use Tor for performance reasons.

“Unlike using Tor, Dandelion is implemented within the existing cryptocurrency peer-to-peer network, so it doesn’t rely on (or impose costs on) an external service. It’s also lightweight and fairly easy to implement on top of existing cryptocurrency gossip networks because it does not use encryption,” said Andrew Miller, one of the researchers of Dandelion and Assistant Professor at the University of Illinois.

Dandelion does not make it impossible to link a user’s transaction to their IP address but it currently offers the best possible protection over transactions without resorting to encryption.

“Dandelion is an elegant and lightweight solution to further conceal IP addresses and we are proud to be the first to implement it in a cryptocurrency. Having an IP address connected to a transaction can give information as private as your physical location, name and account balance – the exposure of this can have very far reaching ramifications,” said Yap.

There have been several high profile cases where people have become targets because people are aware that they hold a lot of cryptocurrencies.

Some noteworthy cases include managing director of Ukranian cryptocurrency exchange EXMO who was kidnapped in Ukraine and released after paying a ransom of $1 million in Bitcoin and creator of cryptocurrency PRIZM who was robbed of 300 Bitcoins in Moscow.

Zcoin (XZC) is an open source, decentralised privacy coin that focuses on achieving privacy and anonymity for its users while transacting on the blockchain. It is the first full implementation of the Zerocoin Protocol, which allows users to have complete privacy over their transactions via zero-knowledge cryptographic proofs. Zcoin does not use the same cryptography and is not related to other cryptocurrencies utilizing the Zerocash Protocol.