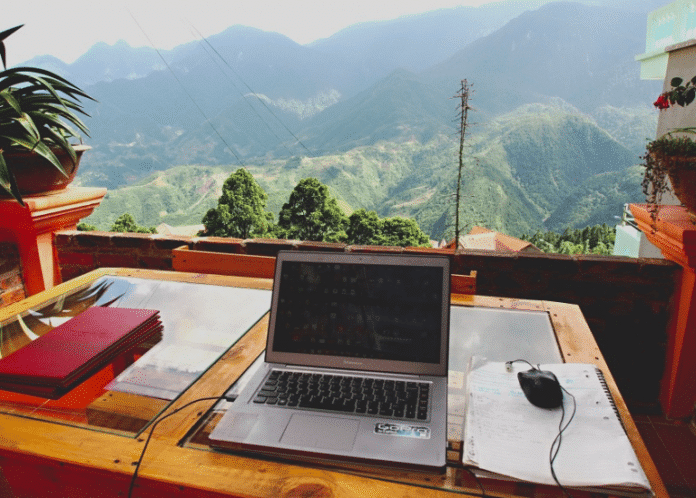 The internet has completely changed the nature of freelance work. Nowadays, freelance workers in all fields from web design to search engine optimization are capable of traveling the world, checking in to job boards and gig websites like Fiverr and Pro Blogger to find opportunities that suit their strengths. And, this can all be done by using their laptops.

The sheer influx of coworking spaces is testament to the number of people increasingly moving into freelance work, choosing to live in cheaper cities worldwide while staying connected to their employers. However, the physical distance between contractor and employer often results in scammed contracts and payment refusals after the freelancer has completed a project.

No one wants to work hard on a project only to be ghosted or denied payment afterward. Some types of scams include the partial payment scam, unique work sample scam, and the revenue sharing scam. Through the blockchain, freelancers are able to create smart contracts, solidify their reputation, and use micropayments and smart transactions to create a fairer working environment. Let’s take a look at how the blockchain facilitates these solutions.

A smart contract is a piece of software that holds all of the terms of agreement between two parties. It automatically verifies the contract, and then carries out the terms of agreement. Instead of placing trust in one centralized system which gives power to one party, all sides involved can feel safe knowing that they are making transactions on the blockchain’s decentralized system, which provides fairness and equality.

In the case of a freelancer using the blockchain, the contract would be paid in a designated cryptocurrency upon completion of the project. This also means that both sides will be able to access the smart contract, as it will be stored on the blockchain. Just like traditional centralized systems, the smart contract can issue payments automatically when authorized. This can be done when milestones are reached or when the project is completed.

What’s more, the blockchain can store the events in each contract in chronological order, meaning that past contracts can be accessed and reviewed as well as provide proof that the contract was completed. Furthermore, the system continues to function properly if one party drops out of the contract (in the case of multiple parties involved).

Any freelancer will testify to the importance of building a good reputation in their field. In fact, as a freelancer, reaching the point where his or her reputation is known in the industry could take years. That’s why it comes as a major blow when freelancers realize that their reputation can be hacked and manipulated in the form of identity theft.

The beauty of the blockchain stems from it storing information on multiple systems in various locations, instead of having everything in one centralized location. With the addition of Public and Private Keys, information stored on the blockchain is virtually unhackable.

Through the blockchain, an app could be developed which aggregates the reputation of a business, or of the freelancer. If either party has a negative score based on timely project delivery, or how they treat their employees, this could be a significant factor in whether or not the freelancer decides to work with the company, or vice versa.

Glassdoor, for example, provides information on the working environment in specific companies, from salary to management. If such an app were developed, where the reputation were aggregated on both the employer and the employee, this would provide a much more transparent hiring process for all. A similar website to Upwork, for example, with the ability to review freelancers and employers, but on the blockchain. Freelancers wouldn’t have to worry about the ‘work sample scam’, where candidates are asked to submit a sample article in their application and subsequently rejected — giving the company a free piece that the freelancer worked hard on. Companies would also be aware of the many scams that they are subject to by freelancers.

The standard model for monetary transactions made online requires payments to go through an extra set of hands between the employer and the employee. The blockchain aims to change this with smart transactions and micropayments.

With third party involvement, there are almost always commission fees attributed to any transaction. This is why, when dealing with small amounts, making online transactions becomes costly. Meanwhile, cryptocurrencies such as the Bitcoin have the potential to be used in immediate micropayments. For example, if the employer is based in the United States, and the freelancer is working out of Australia, the transaction could take days to come through. However, paying through the blockchain allows for the transaction to be completed in seconds.

In 2016, the Commonwealth Bank of Australia and Wells Fargo used the blockchain to ship cotton from Texas to China. This was considered the first ever global transaction on the blockchain, and established its worldwide potential. The blockchain is able to record any exchange, whether it’s money, property ownership, or a domain name, and much more. Monetary transactions are recorded safely, which is why major organizations have already started using the blockchain for these purposes.

Since its invention in 2008, the blockchain has been steadily introduced as a solution to many issues in our modern world, such as applications in healthcare, transportation, and smart cities. If adequately implemented, it could be of help to the freelancing industry as well, providing a safer environment for all parties involved. One thing is certain, businesses and freelancers alike are realizing that the blockchain could solve many of the existing disadvantages of long distance business agreements.