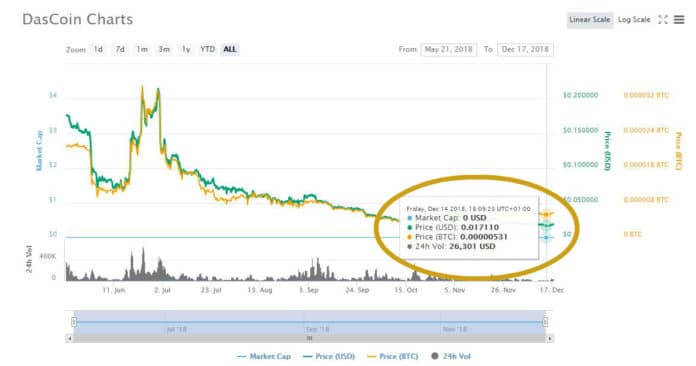 Users invest in the so-called DasCoin points that are basically a pump and dump scheme that sees affiliates invest up to €25,000 in DasCoin and is designed, like Onecoin, for the owners and top ‘affiliates’ to get rich quick.

DasCoin, which dubs itself a currency of trust is merely a OneCoin clone. Anyone who invests in DasCoin does so through Excelz (their third name change), where you use real money (ranging from €100 to €25,000) to pay for your license. The higher your investment the more cycles you receive and the greater the amount of DasCoins you can receive by using those cycles.

Here’s how it works.

DasCoin are non-publicly tradeable points, purportedly tracked through a non-public blockchain as of March, 2017. How the company tracked DasCoin points investment prior to March has never been publicly disclosed.

On the backend, the only source of revenue entering NetLeaders and DasCoin is newly invested affiliate funds. The use of which to pay Net Leaders affiliates a ROI when they cash out their DasCoin points makes the entire operation a Ponzi scheme.

It’s also a 1:1 copy of the OneCoin Ponzi scheme, who pioneered the combination of Ponzi points with cryptocurrency back in 2014. That Net Leaders and DasCoin are modeled on OneCoin is no coincidence. John Pretto, Chairman of Net Leaders, is a former OneCoin affiliate investor. So is DasCoin CEO Michal Mathias.

Allegedly – via a source who requested anonymity, Dascoin have raised over 400 million dollars which is firmly in the pocket of CEO Michal Mathias who has been on a spending spree, renting megayachts and spending millions on continuing to push Dascoin in Asia – usually to poorer people who think they will get rich quick.

Mathias claims to have nothing to do with notorious Ponzi Scheme OneCoin – which has over two dozen government warnings several countrywide bans, over 70 arrests in at least six countries on three continents and €2.6M in fines. Yet the Dascoin CEO was a host of their failed US launch.

OneCoin’s public frontman Sebastian Greenwood was recently arrested and extradited to the USA. He was jailed by Thailand’s Crime Suppression Division (CSD) in Thailand with help from the US Federal Bureau of Investigation (FBI). Allegedly, Greenwood was able to steal tens of millions of dollars from affiliates.

“Jonathan Galea, president of BitMalta, confirmed to Malta Today that “Michael Mathias is an affiliate of OneCoin, one of the biggest crypto ponzi schemes”.

“He said that the DAScoin project was being led by NetLeaders (previously known as Coin Leaders), and that the chairman of NetLeaders was John Pretto, one of the most active promoters of the OneCoin Ponzi scheme.”

“Additionally, the CEO of DAScoin is Michael Mathias, a well-known OneCoin affiliate although it is unknown whether he is still involved in OneCoin or not,” Galea said in a statement. “Therefore, two infamous OneCoin backers are behind the DAScoin setup, which should already serve as enough red flags to send a bull into full frenzy.”

“Although MLM in itself is not necessarily illicit, it is often used for fraudulent purposes, as happens to be the case in DAScoin,” he said. “NetLeaders/Coin Leaders has laid out a seemingly-attractive investment scheme whereby the more one invests into DAScoin, the more one receives corresponding tokens, in a non-linear manner (another red flag).” In fact, original investors get a hefty bonus once a certain number of referrals are accumulated in order to encourage other people to join in the scheme.

They went on as far to go after and threaten Galea for a piece he wrote in Maltese Today unveiling that Dascoin was a fraud.

DasCoin (DASC) Reaches Market Cap of $0.00 according to Fairfieldcurrent.com:

DasCoin (CURRENCY:DASC) traded up 6.6% against the U.S. dollar during the 1-day period ending at 3:00 AM E.T. on December 2nd. Over the last seven days, DasCoin has traded down 1.7% against the U.S. dollar. One DasCoin coin can currently be bought for approximately $0.0190 or 0.00000577 BTC on major cryptocurrency exchanges including CoinFalcon, BTC-Alpha and IDAX. DasCoin has a market cap of $0.00 and $48,067.00 worth of DasCoin was traded on exchanges in the last day.

The Dascoin listing on CoinMarketCap has yet to be removed.

And it’s still listed on CoinFalcon, BTC-Alpha, CoinBene, and IDAX exchanges which is ridiculous.

And Polish authorities are on the case:

“Since DasCoin and Net Leaders are under criminal investigation in Poland. Indeed, it was possible to seize $11.6 million dollars that were tied to DasCoin investment using Net Leaders.”

“The district prosecutor in Warsaw on September 21, 2018, has been investigating under the reference number PO III DS 176.2018 regarding bringing in from September 2016. Throughout the country, a number of people are disadvantaged by the sale of goods via sales through a website (netleaders). License for the purchase of a number of products and services offered under the DasEcosystem system, including the extraction of cryptocurrency called DasCoin.”

More on the Polish criminal case against Dascoin here and here.

And it’s not just the Poles who are investigating – DasCoin was also leveled with a cease & desist by Canadian regulators for Securities Fraud.

The North American Securities Administrators Association recently announced the pending results of a massive strike against cryptocurrency scams known as “Operation Cryptosweep.” Though many investigations are still ongoing, at least one major regulatory action has been levied against a significant player in the multilevel marketing game which has dominated the seedier aspects of the cryptocurrency and ICO sectors.

British Columbia securities officials recently issued a cease and desist notice against DasCoin, a new cryptocurrency which has just recently won a listing on premier cryptocurrency exchange CoinMarketCap. No official response has been issued by the company, and the operating strategy thus far seems to be to ignore the legal snafu and work to hype up their current market moves.

Dascoin is, undoubtedly… a scam in my mind. The evidence gathered by others and legal actions in Poland and Canada make it quite clear. According to a source, Mathias is firing people left and right, and the team has been reduced to a handful. These thieves belong in jail, not free and living off the utopian get-rich-quick schemes designed to rip off those who are interested in cryptocurrency yet gullible and uneducated… and usually not very well off financially. Using economy of scale and MLM practices, the Dascoin scammers have managed to, allegedly, put almost half a billion dollars in their coffers. And the fact, despite clear evidence of being investigated by a number of authorities, having money seized, and clear proof they are a Ponzi Scheme, they are still listed on a number of lazy exchanges and Coinmarketcap giving them credibility they do not deserve.