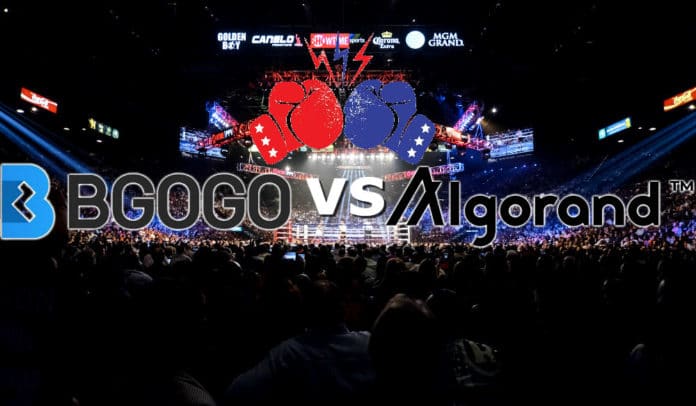 Without the permission of Algorand.

Bgogo is essentially using IOUs to create a futures market, using its “Apollo” project to launch other tokens and exchange offerings – whether they like it or not.

This is not the first time this has happened. HitBTC and some other exchanges have been trading IOUs on unissued tokens for upcoming ICOs for years – such as with Tezos. The Liqui Exchange (RIP) did this with a few tokens including Antshares, Decent, Iconomi, Wings, and Melonport.

But the key difference here is that Algorand has not even announced a plan to do a token sale yet, never mind price their token.

And they don’t seem to be too happy about it:

To be clear: The @Algorand Network has not yet launched and there are no token sales. Any information to the contrary is false. We will be sure to keep our channels updated as soon as there are important announcements.

It will be interesting to see if Algorand will go to the courts to try and stop Bgogo.

Algorand, who raised USD$62 million in a 2018 VC round, was founded by legendary cryptographer Italian computer scientist Silvio Micali, who works out of the MIT Computer Science and Artificial Intelligence Laboratory and is a professor of computer science in MIT’s Department of Electrical Engineering and Computer Science since 1983. Micali is best known for some of his fundamental early work on public-key cryptosystems, pseudorandom functions, digital signatures, oblivious transfer, secure multiparty computation, and is one of the co-inventors of zero-knowledge proofs.

Bgogo, domiciled out of the Cayman Islands, met their modest cap and raised USD$3.8 million in their ICO but allegedly have a war chest of over USD$200 million from a private sale backed by some major Chinese and Silicon Valley VC who also participated in the BGG token sale and attained supernode status on their platform. Supernodes are entitled to pick a cryptocurrency to list on Bgogo exchange. If there are multiple supernodes competing to list a cryptocurrency, then Bgogo can choose which supernode they nominate the cryptocurrency to. Supernodes earn 20% per-trade commission from trading the cryptocurrency that it nominated.

BGG tokens will be privately funded by 21 blockchain companies and VC firms as shown in the below diagram and as such, they will act as the platform’s first supernodes. Notable Supernodes include Pantera, Hashed, Michael Arrington, and Kosmos.

The Bgogo team include members from companies such as Facebook, IBM, Alibaba, etc.

Bgogo’s transaction mining is not without criticism as the application of the “trans-mining fee” massively increases daily trading volume on these exchanges which moves them up in the global ranking, increasing their brand awareness and bringing them new users.   But they are not alone, BitForex, FCoin, CoineEx, CoinBene and Coinsuper and another dozen exchanges now offer transaction mining.

According to an article by P. H. Madore at CCN,

“Bgogo is an exchange which isn’t listed in the top 100 exchanges by adjusted volume. They reported an impressive $500+ million in the past 24 hours. Adjusted volume on CoinMarketCap.com discounts exchanges with no fees or that utilize transaction mining. On the regular “reported volume” section, which has some otherwise-no-name exchanges in the upper echelons, Bgogo is #28.”

“The utilization of the trans-mining fee approach is akin to starting an ICO (initial coin offering) without the usual overhead costs of marketing, business development, and legal procedures. These exchanges are simply distributing their tokens in exchange for trade fees paid in other cryptocurrencies.”

CER also issued a scathing report on Bgogo accusing them of synthesizing liquidity and concluded that Bgogo is an unreliable and unsafe crypto exchange to trade on.