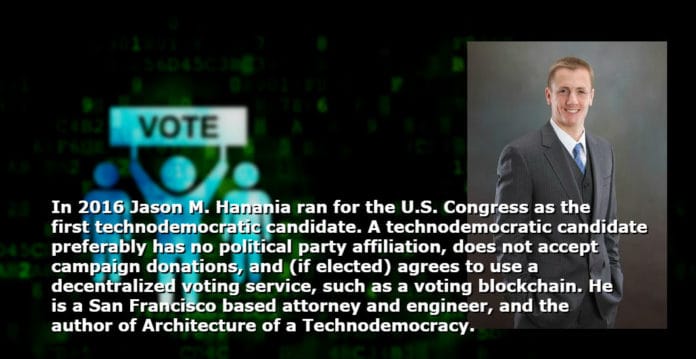 Jason M. Hanania is a San Francisco based attorney and engineer, and the author of Architecture of a Technodemocracy.

Blockchain News: What exactly is a technodemocracy?

Hanania: A technodemocracy is a government system that utilizes technology to decentralize governing power from individual group members to all group members. From rulers, or a handful of politicians and campaign donors, to 100 percent of those ruled. Culturally speaking, it decentralizes power from “the one percent” to “the 100 percent,” regardless of wealth, race, religion, or gender.

Blockchain News: How does a technodemocracy work?

Hanania: Two hundred years ago, asking people to vote on every political issue, using paper ballots, was among other things impractical. The process would have been too time-consuming. Republics made more sense, so a handful of representatives were elected to make decisions for everyone. Power was decentralized, from one person to the one percent. In a technodemocratic republic, elected representatives would make decisions based on documented evidence of majority interests, as provided for by a decentralized voting blockchain. That voting blockchain would be owned and controlled by the 100 percent. In a technodemocracy, each voter can vote on each and every political issue. They can also post new political issues and polls, and communicate peer-to-peer with other voters. Social priorities can be identified based on voter turnout.

Blockchain News: Is technodemocracy a form of egalitarianism?

Blockchain News: Is there an equation for government power?

Blockchain News: How does technology factor into all of this?

Hanania: Hacking isn’t unique to computers or software. Paper ballot elections, for example, have been hacked for centuries. If you put all the votes in one place, such as a ballot box, the election can be hacked by whichever central authority controls the ballot box. The problem is centralized information. Centralization empowers the middleman. Blockchain software decentralizes information. If you don’t understand blockchain, it helps to think of a blockchain as a spreadsheet. In the case of financial blockchains, like Bitcoin, every depositor is given a copy of the spreadsheet, not just one person, such as a bank accountant, bank official, or some other middleman. In the past, bank officials could fudge the numbers. In the case of voting using blockchain, every voter has a copy of the spreadsheet. An election hack would require fudging the numbers on a majority of the spreadsheets, which is impractical. Votes are tallied automatically, using encrypted voter-to-voter communications. Every voter can audit all of the voting results. There is no middleman. There is no centralized power. The underlying software is open source and can be audited by any voter at any time. Bitcoin has successfully provided us with a ten-year test drive for blockchain.

Blockchain News: What do you predict will happen in the coming decades?

Hanania: That depends on our priorities as a society. Do we prioritize profit or do we prioritize people? The equation for government power helps us predict the most important societal roles for blockchain. For example, communication power requires decentralized media. In the coming decades, Facebook and other corporate media networks could become obsolete. Option power requires decentralized commerce, so Amazon and traditional banks could become obsolete. Decision power requires decentralized voting, so elections could be controlled by voters, instead of by politicians or covert actors. Similarly, accountability power requires decentralized whistleblowing. WikiLeaks, for example, could become obsolete. Some corporations and government agencies are fighting with grim determination to own and control everyone’s personal information. We could continue to create bigger and badder versions of Google, Facebook, and Amazon; or we could instead create a decentralized user platform, stacked with a variety of blockchains offering search, social media, shopping, and so on. Such a platform would be free to use, self-funded through consensual advertising, owned and controlled by 100 percent of its users, and governed by a technodemocratic voting blockchain. On this type of platform, the design possibilities, for smart contracts and other social mechanisms, are endless.

Blockchain News: What concerns you about corporate blockchain?

Hanania: My concerns involving corporate blockchain overlap with artificial intelligence (AI) technology. We could use AI and blockchain to give people more option power. That is really the definition of freedom. We do not need technology making decisions for us, otherwise, decision power becomes centralized in the corporations and software developers creating that technology. For example, we don’t want AI overriding the pilot of the plane, like the plane that crashed in Ethiopia, we want AI to provide the pilot with options. The pilot then makes the decisions. If AI makes the decisions, the plane might be programmed to always take the most fuel-efficient course. It would save airline corporations fuel and increase profits. But if that AI-proposed course fails to factor in surface-to-air missiles, due to a civil war, the plane could get shot down. A human pilot should be vested with the decision power, not AI. This is why software developers need to understand government power.

Blockchain News: How will we know if technodemocracy is becoming a political reality?