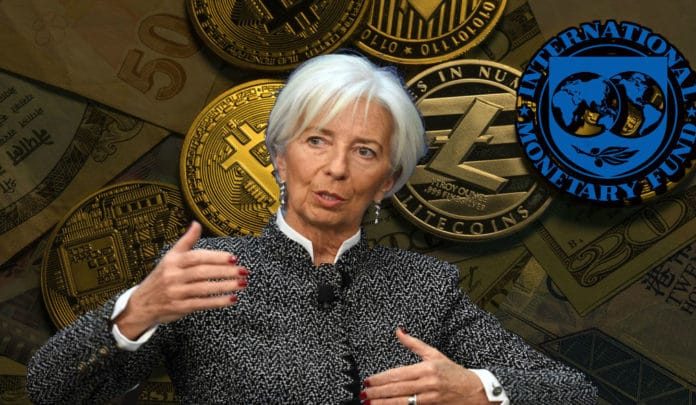 Appearing at the IMF’s spring meeting on Wednesday and following a panel discussion on the global network of money and payments, International Monetary Fund Managing Director Christine Lagarde made several statements addressing blockchain and crypto to CNBC on video.

“I think the role of the disruptors and anything that is using distributed ledger technology, whether you call it crypto assets, currencies, or whatever – and it’s far from the bitcoins that we used to talk about a year ago – that is clearly shaking the system.”

“The voices that we heard I thought were really interesting were those of the regulators and central bank governors who said this is good and this is helpful and it is changing the business model of commercial banks. But we have to be mindful of two things, trust and stability of the systems and we are equally concerned at the IMF about stability. We don’t want innovation that would shake the system so much that we would lose the stability that is needed and… our regulators and doing enough right now to ensure that stability and as well competition from some of these big tech companies being involved in this space.

“CBDC, or central bank digital currency, was one of the most popular topics at the IMF Spring Meeting this year, with packed rooms of attendees interested to learn more about it.”

“It’s clear that the government and private sector are both very interested in learning more about CBDC and what the future of digital payments might look like. It’s commendable that the IMF and World Bank Group have decided to embrace and feature dialogues on CBDC, setting an important example for other international organizations.”

“In many of the sessions, central bank officials conducting experiments with CBDC, such as those from Canada, Sweden, and Uruguay, discussed their work. In the panel “CBDC: Should central banks issue digital currencies?” Deputy Governor of Sweden’s Central Bank Cecilia Skingsley discussed several key issues, also stating that there’s a greater than 50% likelihood the Riksbank would issue a CBDC within the next 10 years.”

“The IMF and World Bank’s new blockchain project, “Learning Coin,” is an exciting grassroots efforts from multiple departments who wanted a hands-on approach to learning about blockchain technology. In their spare time, they impressively created a blockchain-based mobile phone app, where staffers can read curated content and watch videos related to blockchain technology in exchange for earning “Learning Coin,” which is a valueless in-app currency that can be redeemed only within the two organizations.”

The International Monetary Fund (IMF) official Twitter account ran a poll last week, asking “How do you think you will be paying for lunch in 5 years?”.  Some 38,000 votes later and not surprisingly, cryptocurrency got, by far,  the most votes, followed by ‘Mobile Phone’, ‘Bank Card’ and ‘Cash’.

How do you think you will be paying for lunch in 5 years? #IMFmeetings #DigitalPayments