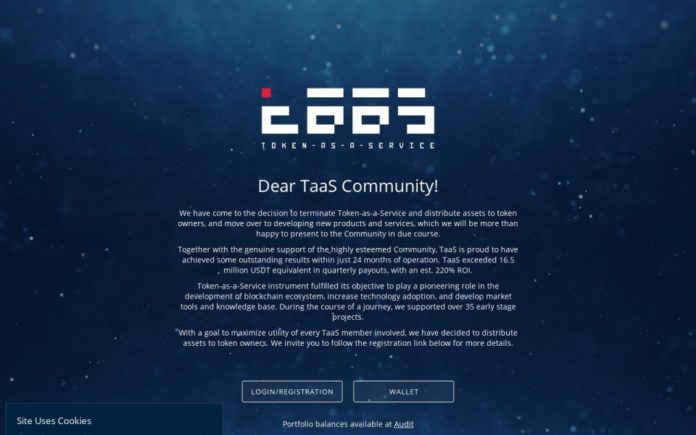 TaaS or Token-As-A-Service is closing down. An early pioneer in the ICO arena, they launched at the beginning of 2017.

“I am proud of our team for continuously over performing the blockchain market benchmarks and generating alfa. We love this constantly evolving industry and will stay dedicated to blockchain and cryptocurrency. I would also like to express my gratitude to 15,000+ community members for placing their trust in us,” said Ruslan Gavrilyuk, co-founder and President of TaaS.

The decision to wind down the membership token and to distribute the remaining assets to token holders comes as a natural step as markets evolved tremendously since TaaS was first launched. Over the past two years, TaaS grew from the original four founders and three advisors to a team of 40 full-time fintech and technology professionals from USA, Ukraine, Poland, Romania, South Africa and China. The team played a pioneering role in the development of the blockchain ecosystem through the following main activities:

One member of the TaaS Telegram Community noted:

“While some people see the situation as bad, I still see TaaS as the project which “got me in the space” (made me want to work in blockchain/crypto) and I’ll always be grateful to them for that since well, I do work in that today.

It was a fun adventure for me. I’ll remember my nights of not sleeping and answering people in this channel over panics and questions.

From day one, TaaS aspired to provide high transparency standards in the blockchain space. Prior to starting trading on various exchanges in May of 2017, TaaS ICO results were first independently verified by a world-renowned accounting firm Grant Thornton. TaaS has been constantly informing the public on every single contribution or partnership, and published detailed quarterly and annual reports similar to those required from the publicly-traded companies. A total of 70 detailed press releases have been distributed during its 26 months of operations so far.

At the end of the first fully-operational year, ending April 30, 2018, the Net Asset Value (NAV) increased from the original token generation event benchmark (7,569,371.61 USDT equivalent) by over 23 million USDT equivalent while the total gains exceeded

At the beginning of May 2019, TaaS will publish the results of its eighth and final fully-operational quarter (Feb. 1- Apr. 30).

The token membership wind-down procedure will commence immediately,  and the underlying assets will be distributed to the users who have completed the Authorization procedure in accordance with TaaS Compliance Policy.

At the time of this publication, total assets are 10.72 million USDT equivalent while the total supply of TaaS tokens is 8,146,000.78. The exact payout amounts allocated for the final distribution will be published at the beginning of May.

TaaS tokens have been created to benefit from the operations of an Ethereum-based smart contract, which offers token owners 50% of the quarterly gains while 25% of the results are retained in order to increase the capital pool and the remaining 25% to be used by management to grow operations and remunerate the team.

TaaS token holders are encouraged to visit the official website for detailed instructions about the process of receiving their pro rata distribution.

What will the distribution comprise of?

Generally, there are the following types of assets allocable for distribution:

The total amount of assets available for distribution to the Authorized Users will comprise of the total amount of the underlying assets less a two (2) percent fee to cover the costs of termination of Service.

The amount of ETH for distribution will depend on the liquidity of the underlying assets, market environment during liquidation (including order books. rates, slippages etc.). In order to mitigate the exchange risk, the assets liquidation process may take up to 10 days.

For information purposes, the list and amounts of the underlying assets are updated at the Cryptographic Audit page on a daily basis and reported quarterly.

Incorporated in Singapore in February of 2017, Token-as-a-Service (TaaS) has been actively contributing to the development of the blockchain ecosystem. Owners of the TaaS token capitalized on the rise of the blockchain markets without dealing with the hurdles, risks and technical barriers associated with owning, transferring and trading cryptocurrencies and tokens.