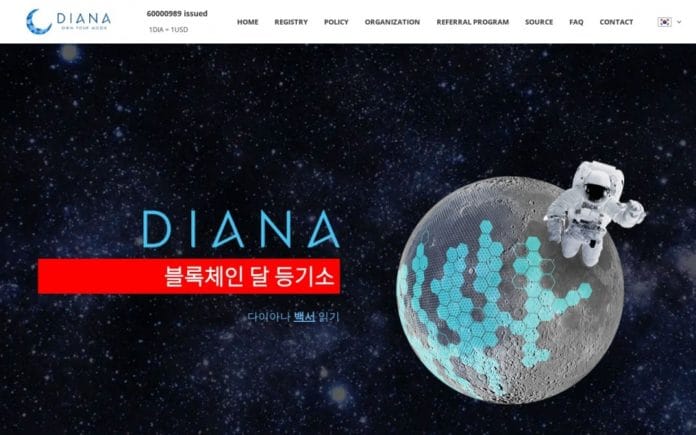 For the 50th anniversary of the Apollo 11 Moon landing, a project called Diana has launched to create a land registry for the moon using Distributed Ledger Technology (DLT).

The dApp (Decentralization app) service that can mark the land of the Moon and trade it will be launched on July 20, 2019.

“The Diana project will be a great opportunity for the Moon to be a daily interest.”

According to a UN Treaty, the Moon is listed as a common heritage of mankind that no country can own. However, due to the tremendous resources of the Moon (Helium-3, a non-radioactive isotope of helium, could be used as fuel for fusion reactors to produce vast amounts of energy at very low environmental cost), competition for ownership of the Moon between certain countries and companies is becoming increasingly fierce.

Governments are jumping into a competition to create domestic laws to rival the UN Outer Space Treaty. In 2015, the United States enacted the Commercial Space Launch Competitiveness Act (CSLCA), which encourages private space development, and in 2017 Luxembourg passed a bill allowing ownership of resources mined in outer space by private companies.

Diana promotes collective registration to secure the possible right of man to the Moon to propose a solution to ‘who owns the moon’.

The Diana project is in line with the idea of combining Distributed Ledger Technology (DLT) with real estate and land in many African countries.

Until now, people and organizations with power have been using or depriving individual lands in developing countries. At this time, the land of individuals who do not register real property or ownership has been helplessly deprived.

So, for instance, the Rwandan government is working with Microsoft to carry out a land registration project using blockchain technology and the aim is to fundamentally eliminate ownership problems by digitizing land registration based on the reliability of the blockchain.

The Diana project aims to clearly define the possible rights of mankind to the Moon, given the increased possibility of ownership disputes, through collective registration.

Anybody can participate in the collective registration of the Moon using the Diana registration system. Of the approximately 3.87 billion cells generated by dividing the Moon into specific areas (approximately 9,790m²), 2 billion, on the front side of the Moon visible to the human eye, are available for now.

Participants can assign addresses with their own meaning for the selected registration area. Since it can be transferred to a third party in real-time, it can be an everlasting gift for those you love.