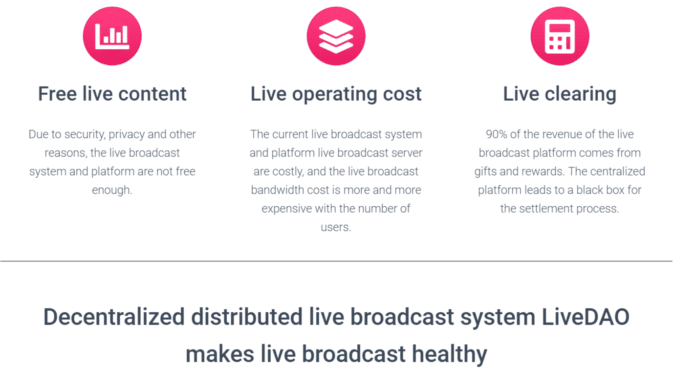 China’s LiveDAO aims to build a secure and private Live system for live broadcasting, making all rules implemented in a truly fair and transparently manner – with an interesting caveat… using 5G.

The project utilizes the brand new P2P live broadcast technology, which can be used in conjunction with 5G cellular network perfectly. Every 5G phone could become a streaming server so that the cost of the Live broadcast system and bandwidth can be reduced by up to 1/400. The Mist Node can become Normal streaming Node and utilize the PoNS (proof of network sharing) mining block. According to the rules, all activity of contributing bandwidth to the ecosystem can get a reward.

With this innovational P2P Live tech, the cost of Live operation reduces rapidly.

At present, the booming live broadcast industry gives prominence to chaos and problems, which is mainly reflected in the following fields:

By LiveChain and Smart-contracts, make Live settlement and liquidation efficient, transparent and fairness.

LIVE is the token that reflects the right of LiveDAO ecosystem, with a total supply of 3 billion. 67% is used for mining, the others are used for team and ecosystem construction. The mined LIVE tokens can trade immediately. Others will be blocked continually and will be unlocked by community voting.

LIVE token is used for staking and consumption, for example: staking LIVE to get a right of broadcasting, get a Live Chain supernode application right and get the right of LiveChain supernode voting, and pay LIVE for products.

LiveDAO will have a merger and acquisition of ecosystem-valuable institutions (such as ITs, CPs, Celebrity Incubator, etc.), the M&A funds come from LiveChainHolding, which scheduled to be listed on NYSE in December 2019.

LiveDAO is a community that gathers participants of decentralized Live system. Through using the technical achievements form LiveChain, Inc., Live fans around the world are constantly take part in the community. Since May 2019, the community grew rapidly, and the LiveChain is scheduled to release at the end of this year.