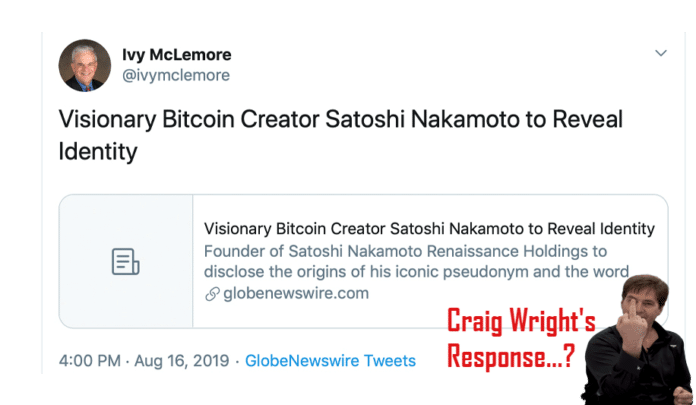 Oh, and there is a clone of the site conveniently posted at Madison Avenue PR firm Ivy Mclemore & Associates' fresh blog post at  “Real Satoshi Revelation”.

He says his nickname as a kid was Shaikho — what seems to be a Pakistani name. He teased that he'll disclose his real-life identity on Aug. 20. But we have to all endure another two days of teasing posts until we get the big reveal.

Meanwhile, the Bitcoin community was quick to trash the author and the whole intent behind this strange new player.

I think that (https://t.co/8QIjGnoYFG) is quite fake!
I mean Satoshi Nakamoto would at least take care of the smallest parts of privacy when taking pictures with a phone, which is to clean up his EXIF data, he even gave us a location as well. pic.twitter.com/znRnVKjJsR

Anyone that tells you they are Satoshi Nakamoto is a scammer.

Apparently Satoshi doesn't know the difference between a ‘cyberpunk' and a ‘cypherpunk' ‍♂️‍♂️‍♂️‍♂️‍♂️‍♂️‍♂️ pic.twitter.com/igoAQrVg5Y

New Faketoshi: “I have $10 billion worth of Bitcoin”

Also new Faketoshi: “I can only afford $1/month for hosting my website” pic.twitter.com/5TxyVJgbJa

No need to wait til Tuesday, seems like these two jokers are behind it

Ivy Mclemore & Associates – is a three-man-band according to Linkedin with a VP who has a shallow history in crypto.

And while being on the subject of #ivymclemore, so no company address but the Whois info puts you at a tiny, single person, small bathroom studio in downtown Manhattan? Meh, not buying that TBH… https://t.co/20VDzmxON1 pic.twitter.com/hmHKmT0yku

Satoshi Nakamoto Renaissance Holdings is claiming that this will happen in three instalments, starting today. It will include his real name, why he hasn’t moved any of his 980,000 Bitcoin, country of origin, and his plans for a “clean-slate vision” for the “rebirth” of “his” brainchild. The new Nakamoto says he'll also explain the critical role that cyphers and encryption-related to Chaldean numerology played in his creation of bitcoin. He claims there's a special reason why he chose August 18 to come forward. He also claims that he registered the domain Bitcoin.org on August 18, 2008.