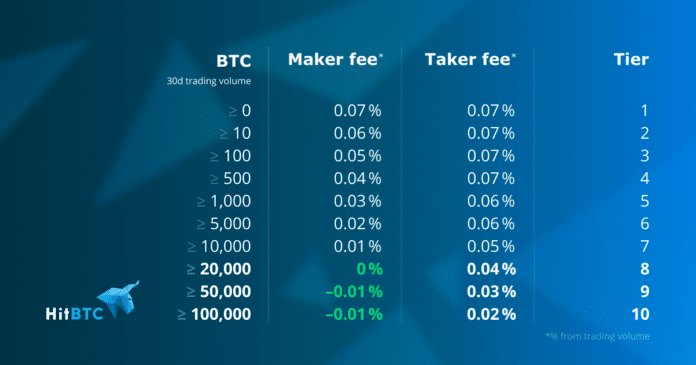 In an industry where the average investor is chained by shackling exchange transaction fees, cryptocurrency exchange HitBTC has taken measures to increase the financial freedom of its users, from the bottom up. Here is a breakdown of how the new system will operate:

By expanding the lower tiers and consolidating, HitBTC has freed up movement for everyday clientele while keeping in place the maker-heavy incentives for the larger architects of market liquidity. For upgraded accounts, HitBTC utilizes a trading fee tier system, rewarding community members for high volume trading. The fees for the rest accounts are fixed at 0,1% Maker Fee and 0,2% Taker Fee.

“Maximizing liquidity and narrowing the spread on cryptocurrency markets, HitBTC employs what is called a “maker-taker” fee tier system. Maker-taker systems are fairly common in the industry and are used to reward users that create liquidity. When a user places a buy or sell order that is outside of the existing range on the order books, they are in effect making liquidity. By doing this they are paving the road for further asset movement on the exchange, whereas, if a user completes an order that already exists on the books, they are in effect taking liquidity off the board,” stated one of the team.

As part of a revamp of its trading fee tier system, the high octane cryptocurrency exchange has radically cut its user fees to market-leading lows and repositioned itself as one of the most advantageous places to trade in the cryptosphere.

With the new fee adjustment, HitBTC has enhanced the benefits all users stand to get from the tier system. At the lowest level alone — a 30-day trading activity that cumulatively adds up to a figure less than 10BTC — fees have been slashed from 0.1% for makers and 0.2% for takers to a flat 0.07% for both takers and makers.

Since its founding in 2013, HitBTC has grown into one of the most active and established markets in crypto trading, with a reputation boosted by its history of uncompromised security. Noted as the largest spot trading market in the industry, with over 800 spot instruments and 400 assets available, HitBTC has been able to carve out a place for itself among today’s exchange titans. With the best liquidity on the market and upwards of $800 million in daily transactions, the exchange draws from a massive user pool which stands to directly benefit from the new fee adjustment.