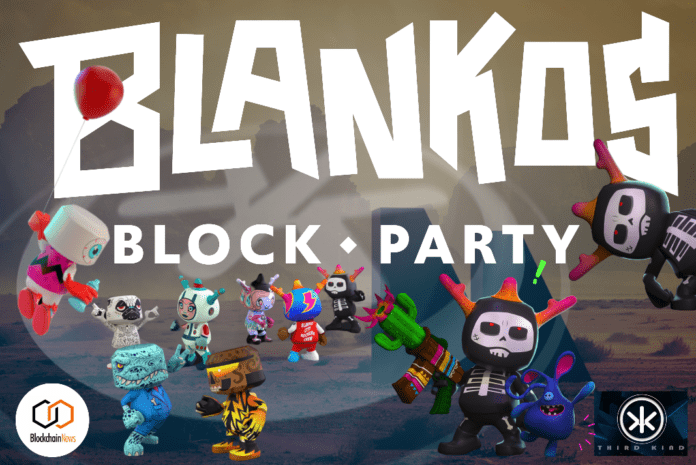 Next-generation game technology studio Mythical, founded by veterans teaming up from projects such as Call of Duty, World of Warcraft, Guitar Hero, DJ Hero, Marvel Strike Force, Skylanders, and The Walking Dead, has announced their upcoming blockchain-driven Blankos Block Party project – a “party MMO” coming to PCs in 2020. Acknowledged by Forbes as one of the Disruptive Technology Companies To Watch in 2019, Mythical is enabling a gaming ecosystem that brings players, creators, brands and game developers together through personalized experiences and content Mythical’s first flagship title ‘Blankos Block Party’ is an MMO set in a vibrant online world built on the Mythical platform.

Developed with UK studio Third Kind Games, Blankos Block Party is designed to be the next step in the evolution of games and how we play. With Mythical’s NFT blockchain engine, the digital objects players buy or build in Blankos are theirs to own or sell. Players can register their accounts now for the chance to be part of the beta, coming later this year.

Blankos Block Party is a free-to-play game that takes place in an inclusive multiplayer world styled like a giant block party, where friends can meet, go on dares with their squad, take on daily challenges and more. In this rich and vibrant online world where imagination is the only limit, players can build what they want to play and share with friends as they collect and customize collectible digital vinyl toys called Blankos. Players will fully own the Blankos they buy with no need for grey markets or loot boxes; the community dictates the value of what they buy and sell.

In this world of mischievous vinyl toys brought to life, players can create and design an infinite number of party games with Mythical’s easy-to-use builder tools. From racing to collection to shooting and more, the immersive and intuitive design system allows anyone to build their own worlds to share and compete with friends.

Every Blanko collected along the way can be levelled up to gain skills and unlock customization options, allowing players to further personalize their experience. Mythical is also partnering with top artists, designers and creators to create exclusive and highly collectible Blankos that players can show off or even sell. In the first fully player-owned economy, Mythical is legitimizing the type of “grey markets” that form in-game communities, and trailblazing a way to participate in verifiable trusted player-to-player marketplaces where consumers dictate value and scarcity.

Players can compete in games, create their own gameplay, and blend digital vinyl toys called Blankos. This first game transforms the relationship between game economies and players, brands, content creators and game developers and showcases Mythical’s vision of player-owned economies. Third Kind Games is an independent UK videogame studio based in Leamington Spa. Founded by veterans of the gaming industry, with an impressive track record of developing critically acclaimed AAA games, for the likes of Activision, Sony, Nintendo, Codemasters, Crytek, and many more for well over a decade.