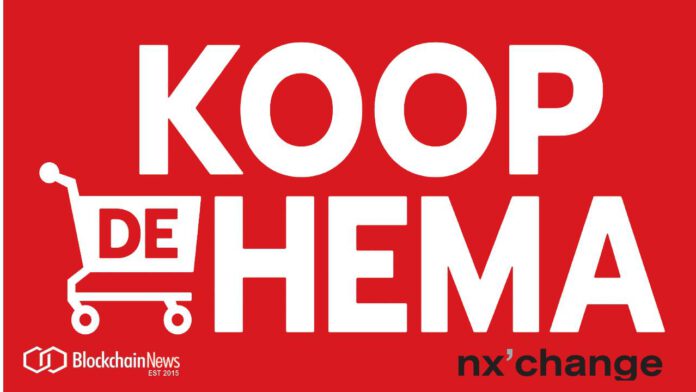 Hema is considered by many to be a Dutch institution having been around for 94 years. In 2015, HEMA was voted the most indispensable brand in the Netherlands for the 8th time in a row. The retail giant has over 700 stores and employs over 20,000 people. Over the years Hema has expanded from the Netherlands to Austria, Belgium, France, Germany, Luxembourg, Qatar, Spain, United Arab Emirates and the United Kingdom.

Hema should be a profitable and successful company but was weakened in the past decade by a massive debt mountain which now amounts to approximately 880 million euros saddled by venture capitalist company Lion Capital, who somehow ‘tricked’ Hema into paying for itself when they purchased in 2007.

And now the coronavirus pandemic has taken the company to the edge of failure.

So a group independent of the brand recently formed the HEMA Foundation to raise funds to buy shares, turn them into depositary receipts (security tokens) and attempt to save the brand by turning it into a multi-stakeholder cooperative by 2026.

They say this allows them to flesh out the concept of stakeholder value according to the Rhineland model, in which a balance is sought between the interests of workers, and capital providers. And to ensure a sustainable future for HEMA by placing it in the hands of all stakeholders big and small, rather than its creditors who have extracted the company into a near death spiral.

Last month Hema filed for Chapter 15 Bankruptcy in the USA. Days later the creditors decided to convert much of the corporate debt into shares which will drop the debt to a more manageable €300 million, allowing HEMA to keep operating, and even to invest in its future.

Dutch Review wrote back in mid-June:

“The group of shareholders will acquire all the shares of the company, and become full owners. They intend to eventually sell the company again to the highest bidder. This deal comes at the expense of the current shareholder of the company, billionaire Marcel Boekhorn, who will lose most of his control over the company. His attempt to negotiate a deal with the company’s creditor’s failed.”

The foundation wants to decentralize ownership for good reasons and writes:

“It hurt us to see how difficult it is for HEMA and its employees due to the financial constructions of the previous owners. In principle, HEMA is a profitable company with many fans in the Netherlands. When the corona crisis came on top of the heavy debt burden, HEMA almost went under. That is why a financial restructuring procedure is now underway. Although HEMA can get out of this better, a subsequent owner could load the company full of debt again. Then HEMA will not make it to 100 years. We want to prevent that. In fact, we want our way of financing to benefit employees and customers. In this way, we hope that the company will not only reach its centenary, but will be another century older.”

The foundation plans to raise funds via a security token sale on Nxchange, a European leader in the emerging blockchain driven security token primary and secondary markets.

“The HEMA is for sale again. We – employees, customers, HEMA fans – can also register ourselves as a prospective owner. With enough people, our patient capital and through the cooperation of everyone who has an interest in the continued existence of HEMA. How great would it be if HEMA becomes our cooperative in 2026, at the centenary ? We will write history when we all buy the HEMA,” added the foundation.

The sale on Nxchange will enable both large and small investors to buy community shares and as of Monday anyone can subscribe for certificates of HEMA shares via Nxchange. The minimum subscription amount is EUR 10. For amounts invested under EUR 100,000, the public can register up to a maximum of EUR 4,999,995. There is no maximum for investors who want to invest more than EUR 100,000. If the HENA Foundation fails to acquire HEMA shares, the investors will get their investment back.

They investors will not actually recieve shares but rather recieve depositary receipts (security tokens) for shares, which can be sold on a primary market and later traded on a secondary market.

This is of course subject to the fact that there is enough liquidity in the market to resell depository receipts.

Cleverly the foundation structured it so investors who have purchased more than € 100,000 in Depositary Receipts will only be able to trade their investment in blocks of € 100,000 as long as there is no prospectus for shares. The liquidity risk is therefore higher for this investor than for the smaller investors.

This is not a typical crowdfunding effort, but rather, they are using a SPAC, a Special Purpose Acquisition Company, which is a means of making investments with the money of (small) investors who can get their money back of they choose to sell their share or certificate again. With a typical crowdfund legally buyers cannot trade the depository receipts if they want want to liquidate. In addition, the depository reciepts will be publicly listed on Nxchanges blockchain-driven stock exchange (listed), means that a price will arise that can fall or rise as there is more demand for your certificate.

Nxchange was founded by Marleen Evertz who beleives that the 20th Century was top-down and she aims to be part of the movement that is working to flip the financial industry in the 21st Century to be both bottom-up and horizontal, powered by networks and blockchain technology.  She was previously the managing director of trading firm, Optiver, where she was responsible for all US activities and managed over 150 option traders.

Evertz created Nxchange to be:

The HENA Foundation was established by Vakbond AVV, financial specialist Anna Grebenchtchikova, The Share Council, united in the initiative HoudeHEMA and the marketing and retail specialists Arjan Leest of advertising agency Cogonez, Sabien Duetz of Bien Innovation and Karen de Loos of Kik communication, united in the WeLoveHEMA initiative.

“With this unique initiative we are going to raise several millions with many small and large investors. If our initiative is successful, we will become a co-shareholder of HEMA. This gives us a voice in the company and thus influence its future,” added Mei Li Vos.

“We are launching KoopdeHEMA, to raise money so that we can buy some of the shares of the future owners. In this way we want to influence the course of the company together,” stated Anna Grebenchtchikova.

According to the foundation there is both financial and strategic work to be done to guarantee the future of HEMA. They say from a financial point of view, HEMA must have a sustainable debt burden, and HEMA’s financiers must see the company as a sustainable investment, instead of as a cash cow.