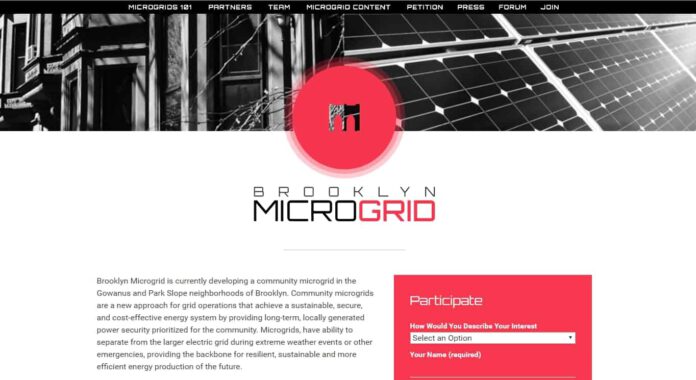 by Steve Hanley  (Posted with permission from Solar Love!)

A community microgrid in Brooklyn is using Blockchain technology to manage power purchases between multiple users and providers. Is it a sign of things to come?

If Neighbor A has solar panels on the roof that generate excess electricity, that power cannot legally be sold directly to Neighbor B. But it can be sold to a microgrid which then parcels it out to others willing to buy it. Keeping track of who is buying what and when can be tricky. But an innovative partnership between LO3 Energy, a technology firm that focuses on distributed energy initiatives, and Consensus Systems, a Blockchain venture developer, has created what they call a TransActive Grid in Brooklyn, New York.

TransActive Grid is a microgrid composed of two energy sellers and 13 potential energy buyers, all in the same neighborhood. Using smart electric meters that can accurately track the flow of electricity both ways, neighbors can purchase excess electricity using tokens rather than money. Blockchain technology takes care of the accounting part.

It records the terms of the contracts, tracks how many energy credits have been sold, by whom and to whom. The system acts also as an instant and secure confirmation of both the verified ownership of a property and its exchange in a way that cannot be questioned.

“Once something is in the Blockchain, it’s in there forever. You can’t go back and rewrite history,” says Campbell Harvey, professor of finance at Duke University. He teaches a course on innovations and cryptoventures, in which he argues that the U.S. power grid could gain efficiency by using Blockchain. A Blockchain ledger allows the transaction to happen directly between the consumer and producer. “Blockchain contracting allows for very efficient low-cost contracting to solve problems like the purchase and selling of energy,” Harvey says.

Building on its experience with the TransActive Grid, LO3’s next project is an actual local energy network called Brooklyn Microgrid says Director of Operations Scott Kessler. Its goal is to create a local, neighborhood powered grid that could operate in parallel to the main grid. One of the appeals of a microgrid is its potential to provide electricity to homes even if the main grid goes down in the event of a natural disaster, says Vijay Modi, director of the Sustainable Engineering Laboratory at Columbia University.

“Even if the larger infrastructure gets disrupted for some reason, you have the potential to meet that critical need locally,” Modi says, since people in the neighborhood may still be able to produce and sell energy. New York state is showing some interest in this idea: It’s holding a $40 million statewide competition to develop microgrid projects.

Richard McMahon, vice president of energy supply and finance for the Edison Electric Institute, which represents investor-owned utilities, says utilities have invested billions in grid improvement projects, including microgrid exploration. Microgrids are simply “one of many areas in which utilities are working on the expansion of the existing grid.”

The utility industry is very concerned that local energy producers pay their fair share to maintain the traditional grid infrastructure.

“We took the meter off the wall.” he says, “We put it into people’s hands, and we expect that there are going to be a lot of interesting and innovative applications.”