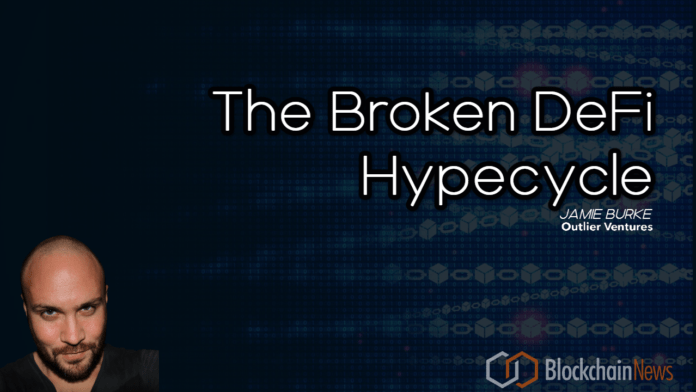 In this series first posted on Outlier Venture‘s Blog, I propose we are a year into a 5 year-long ‘DeFi Hype Cycle’, likely made up of several mini-cycles, where the aggregate effect is a quadrupling of today’s combined market cap and a doubling of the 2017 $600bn highs based on a sustained ‘mainstreaming’ of the industry. In fact, it’s not impossible we hit that in the next 24 months alone should a few things fall into place. So now I’ve got your attention let me explain.

The power of DeFi

Simply put, DeFi is an extension of Andreessen’s ‘software eating the world’.

In this case, the ‘digitisation’ and ‘decentralisation’ of commerce: both in a capital markets context & commerce of all types, including its subsets like ecommerce.

The last decade 2010 to 2020 has created a software layer for the internet capable of creating (minting), storing, moving around, lending & borrowing, digitally scarce, programmable value with minimal intermediation. Centralised exchanges and wallets (aka CeFi) being the minimal mediation layer which improves accessibility and abstracts technically complex administration and custody, but most importantly acts as a gateway (for distribution) for new demand to enter the system.

Unlike the current financial system; DeFi is a bottom-up, open-source, permissionless, environment based on ‘hyper-competition’ which seeks equilibrium between Yield vs Efficiency. At face value that might look like a paradox, and has been called ‘The DeFi Paradox’. However, I propose this is only true if the ecosystem is not fundamentally growing: bringing in either more collateral (supply) but also more liquidity (demand) and closing the loop.

When both of those things happen it kicks starts a ‘hype cycle’ (proper) as we saw with ICOs in 2017. If we reflect back on that period it is well understood it was as a consequence of the combined innovation triggers of:

Now it’s worth stating upfront people like to put CeFi like CEXs (the minimum mediation layer described above) at odds with DeFi. But in fact, they are synergistic if we are to grow the capital and usage of the system: in that DeFi needs CeFi and CeFi needs DeFi and each should be considered one part of the same thing. The only distinction being CeFi is how DeFi interfaces with the existing financial system as it is and associated regulators. It’s where most new demand enters from and where users happily pay a fee for bundling of services and legal accountability should something go wrong. This last point is incredibly important to the majority of people.

Anatomy of a Hype Cycle vs a Broken Cycle

Firstly, it’s worth stating many people assume ‘hype cycles’ are a net bad thing but historically they are when an open capital market forms around an innovation it tries to price, which in the end it always overvalues. Eventually resulting in a sharp correction, which in turn kills hype.

As an open permissionless capital market, this seems to be an intrinsic part of innovation in crypto. It’s how innovation in the space gets financed; albeit in a seemingly capital inefficient way, but it works, or at the least, it’s the best we’ve got.

Often hype cycles are more generally, historically triggered by combinations of innovations as described above; some old, some new, but often put together in a new and timely way.

During the first half of this year, everybody (including me) believed that there would be a major DeFi hype cycle and bull run in 2020 but it somehow stalled; what should be regarded as a ‘broken cycle’. It took me a while to connect the dots but if you follow the logic laid out above in retrospect it’s easy to see why and hypothesise what would be required for a DeFi hype cycle ‘proper’.

So how did it start and why was it incomplete?

Innovations in yield-generating protocols that were ‘farmed’, such as lending, fees, liquidity mining triggered a short period of crazy gains for a small subset of crypto. However, only roughly less than 5% of tokens were staked and they were owned by an even smaller subset of the global crypto population for reasons we will unpack later. So in effect not only was it self-sustained within crypto itself but by a very small subset of it.

In summary, it effectively created a new form of supply, without the new demand required to sustain it. And because it wasn’t linked to any sustainable income of any sort instead it just created artificial recycling of gains. Without any new liquidity entering the system this aggressive form of user acquisition (when thought of in a marketing context) turned out to be a protracted ‘game of chicken’ based on what was typically over-leveraged trading positions based on assumptions about yield, that at a systematic level was ultimately unsustainable. Because most importantly it did not achieve the levels of hype to cross over into the mainstream and bring in new demand from new participants to trigger a wider and sustained bull run.

What’s required for a DeFi Hype Cycle Proper?
What worked? 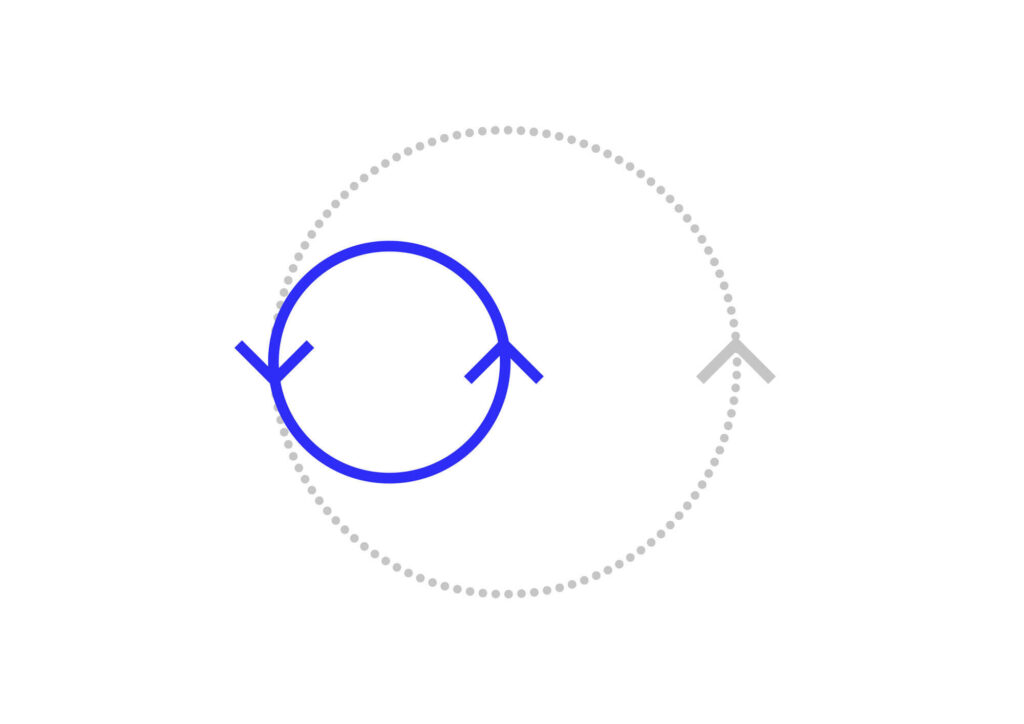 Whilst broken, or at least incomplete, the last cycle did reveal the power of a new supply-side innovation – DeFi is essentially building a new financial system from the ground up. Decentralised automated market makers (AMMs) and liquidity pools provide an alternative to professional market makers, order books and clearing facilities. Flash loans offer unprecedented arbitrage and trading capabilities.

This means debt and leverage are traded freely, in a permissionless environment, putting capital to work in incredible ways. And on top of it all experiments in governance and new forms of coordination mechanisms for its participants, what you would unavoidably call, ‘digital equity’:

…and demonstrated in this particular application; the ability to quickly bootstrap the liquidity of a network for borrowing and lending.

*Now it is worth saying at this point if this sounds a lot like classic equity it’s because it is. And its long-term success is dependent on its ‘net market outcome’, once regulators finally catch up (which if ICOs are anything to go on will be a 2-3 year window).

By ‘net market outcome’ — I mean the degree to which its ‘hyper-competition’ has become unavoidably successful in bringing about efficiency and competition for consumers vs any malpractice when compared to the current financial system. If it fails to properly to go mainstream and makes a significant positive impact for the consumer, today’s ‘DeFi premium’ will become a ‘DeFi discount’ as regulators begin to enforce action. At least to the extent they can. Leading to a clumsy cat and mouse game between regulators and the market which will both momentarily constrain the hype cycle and then amplify it when its unstoppable nature is reinforced: hence the prediction for a series of mini-cycles aggregating up.

Some will argue regulators will never allow digital equity to be sold or used by retail, but the precedents of Bitcoin and Ethereum have shown innovations in this permissionless environment if properly designed and executed, with appropriate levels of censorship resistance and decentralisation, can eventually be acceptable or unstoppable by the time regulators catch up.

Because of its composability and it’s open-source nature, DeFi protocols can easily be replaced or forked, and increasingly its smarter founders are sufficiently distanced or removed from day to day governance. Some choosing (and sadly some abusing) anonymity.

When Programmable Privacy solutions such as The Secret Network begin to be layered on top of DeFi, both the community members who build and govern the protocol, but also the applications built on the protocol itself can choose the degree of anonymity they want allowing for greater participation, innovation and decentralization.

But now if we go back to the reasons for DeFi 1.0’s limitations: This series of supply-side innovations when combined with stablecoins also arguably failed to cross over because of maturity and ‘protocol fit’ constraints:

*This last point is because of the complexity of the DeFi stack’s composability, something well articulated here as by Key Tango’s Dan Danay.

In the following series, I will argue there are both several Supply and Demand Side (near to midterm) innovations coming to market that remove many of these technical or economic constraints (fully or partially) and when they do it promises to take the handbrake off in DeFi and allow a series of, likely mini, hype cycles that could well aggregate into a meta cycle and subsequently a major 12 to 18-month bull run.

Perhaps the most immediate being NFTs (Non-Fungible Tokens) as a mechanism to reward loyalty and discourage highly promiscuous and unsustainable yield hunting leading, with its race to the bottom economics and ‘vampire attacks’ , where DeFi protocols are aggressively forked, new short term incentives added and liquidity quickly lost.

Importantly these hype cycles, unlike the first broken one, should successfully bring in two new types of demand from distinct types of participants: broken down into two separate articles as Retail (2/3) & Institutional (3/3) and with them respective liquidity, each with their own prerequisites that first must be met.

This article was first published at Outlier Venture’s Blog.