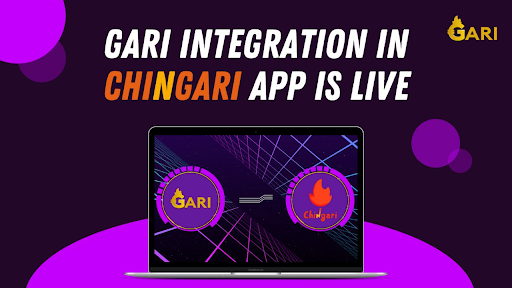 Chingari, a decentralized short video app, has launched its revamped mobile application featuring the native $GARI token on Google Play Store and Apple App Store on Monday. The app launch follows a successful testnet launch by the Chingari community last month. According to the statement from the team, the short video-making app will launch an in-app wallet with $GARI as the main token in the ecosystem.

Dubbed the ‘Indian Tiktok’, Chingari aims to revolutionize the content creation scene on its platform in an effort to onboard the millions of daily users on the app to the Solana blockchain. As the main Chingari ecosystem token, $GARI will allow users to ‘tip’ their favorite content producers on the Chingari app and ‘boost’ their profile and content. Users can also deposit and withdraw $GARI from their in-app wallet, and trade the token on some of the world’s largest cryptocurrency exchanges.

Speaking on the latest integration of the in-app $GARI wallet, CEO and Co-founder of Chingari, Sumit Ghosh said,

“This will be a game-changer in the Chingari App when millions of users will experience the integration of GARI. The existing and new users will be able to Tip the other creators, boost their profile, gain governance rights, and experience a lot more features on the app. With this, we also move in the direction of being a project with the highest on-chain users. We are very excited to launch the in-app wallet of Chingari and give the users revamped app with loaded features.”

Last week, the $GARI token became the first-ever crypto to gain a simultaneous listing on a number of prominent centralized and decentralized exchanges. Some of the exchanges to list the token includes FTX, Kucoin, Huobi, Gate.io, OKEx, and MEXC Global. Surprisingly, the $GARI trading volumes hit over $100 million less than a day later following the simultaneous listing.

$GARI launched in October 2021 amidst much fanfare and attention from the mainstream media. The launch party was graced by Bollywood actor-cum-brand ambassador, Salman Khan, introducing the app and token to new audiences and markets. In December, $GARI launched a testnet version of the revamped Chingari app with the in-app wallet to its community. More than 500 community members participated in testing the app by activating wallets and sending each other $GARI tokens.

With over 100 million downloads on the Chingari app, the $GARI token could well see unrivaled demand from the crypto community. Notwithstanding, the app aims to support cost-effective and fast on-chain transactions hence launching $GARI as an SPL token on the Solana blockchain. In the next quarter, the $GARI network will be rolling out a video NFT marketplace on the Chingari app.

The launch of the $GARI ecosystem will enable Chingari app users to create sub-economies within the platform, ushering in a new Web 3 metaverse in the video creation industry. This will allow content creators to interact with their fans, sell merchandise, and mint unique short videos as NFTs. Lastly, the economic ecosystem incentivizes curation on the platform by rewarding the best content creators for their work, or users for watching and sharing the videos.