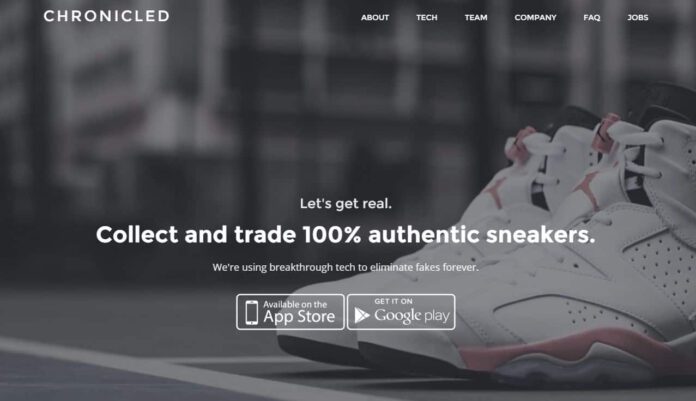 Chronicled, which has developed a full hardware and software platform for authentication, tracking, and social engagement around collectible and vintage sneakers using Blockchain technology has announced that it has closed a Series Seed financing, raising an additional $3,425,000. The round was led by  a prominent Hong Kong-based venture capital firm, with participation from New York city based investment firm Colbeck and San Francisco based Pantera Capital, a leading investor in Blockchain technology.  All three investors have participated in previous financing rounds for Chronicled.

“Chronicled has built a strong team and continues to deliver on product, engineering, and operational performance milestones,” said Dan Morehead, Partner at Pantera Capital.  “Collectible and vintage sneakers are just the beginning.  The intersection of the consumer Internet of Things and blockchain is going to be a big trend over the next decade.  Authenticity verification and provenance of luxury goods and other physical items is a huge untapped market, and due to privacy concerns consumers will want to own the data history associated with their physical property, which is a benefit of a blockchain-based back-end.”

Chronicled, founded in September 2014, has established a world-class product development and engineering team in Silicon Valley and since the Company’s soft launch at the annual CES Convention in Las Vegas in January 2016, Chronicled has authenticated thousands of pairs of collectible sneakers.  The Chronicled App is currently available in the Apple App Store and Google Play Store.

Chronicled intends to use the proceeds of the financing to build up its customer base, to implement a first-of-its-kind encrypted BLE tagging solution, and to expand its data and analytics capabilities.  The Company will be launching its sneaker authentication service in the NYC area in April 2016 and is offering authenticity tags to consumers at Sneaker conventions and through partnerships with selected sneaker resellers and retailers.  Chronicled is also actively exploring partnerships with sneaker brands to include authenticity chips at point of manufacture, as it demonstrated with its successful Beastmode x GREATS partnership last year.

“Chronicled represents a unique and exciting way for collectors and marketplaces dealing in high-end consumer goods to offer a guarantee of authenticity,” saidSong-Yi Zhang of Mandra Capital.  “Markets in the US and Asia alike have been in need of such a solution for a very long time, and we see great opportunity for this technology in our region.”

The collectible consumer goods market exceeds, by some estimates, $1 trillion in annual transactions, with high-end sneakers accounting for upwards of $1 billion of this total. In recent years, counterfeit goods – in some cases nearly indistinguishable from the genuine item – have become a rapidly growing problem, cheating customers of billions of dollars annually. In response to this growing crisis, Chronicled believes its platform can re-establish trust among consumers and strengthen connections between brands and their customers.