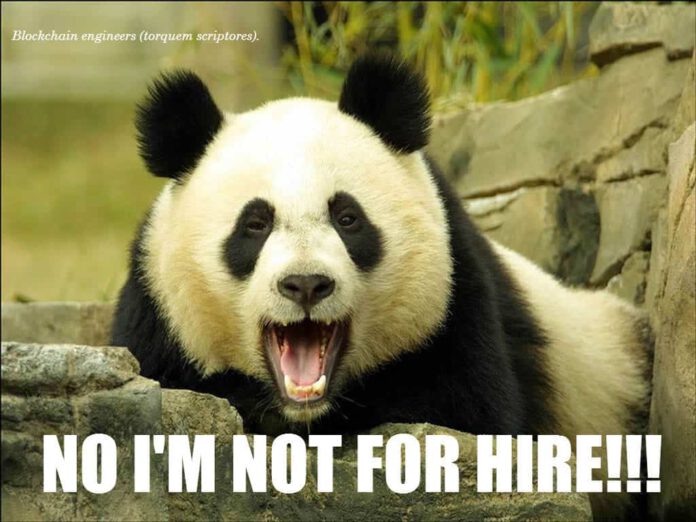 Apparently, there are less then 100 true Blockchain engineers in the world according to Bart Cant, a principal in Capgemini’s financial services practice.

“I’ve heard people say there are probably less than 100 true blockchain experts in the world.”

In an article at the Wall Street Journal Kim Nash interviewed Cant and notes that the giant panda (Ailuropoda melanoleuca) is more plentiful than real, hardcore Blockchain engineers (torquem scriptores).

At least twice a week I get messaged on Linkedin or by email from headhunters desperate to find Blockchain staff for their desperate clients. I have been reduced to simply copy pasting a generic response stating that they might have better luck finding the lost city of El Dorado than finding a Blockchain developer.  At least through me anyway.

There’s certainly tons of room for training Blockchain developers and it would be good to see some more initiatives in this area. Blockchain events put together by event companies are a dime a dozen now, but it’s mainly Blockchain 101 and there’s little deep knowledge transfer going on. While we wait for curriculums to be created, it might be a good to see some more Blockchain hackathons in the scene – and put together Blockchain companies with APIs and SDKs with developers who are interested in the space backed by companies who are looking for talent or to build developer communities.

If you are interested in supporting initiatives of this kind, let us know at Blockchain News as we also run hackathons at our Foundation in The Netherlands, called the Hackitarians.