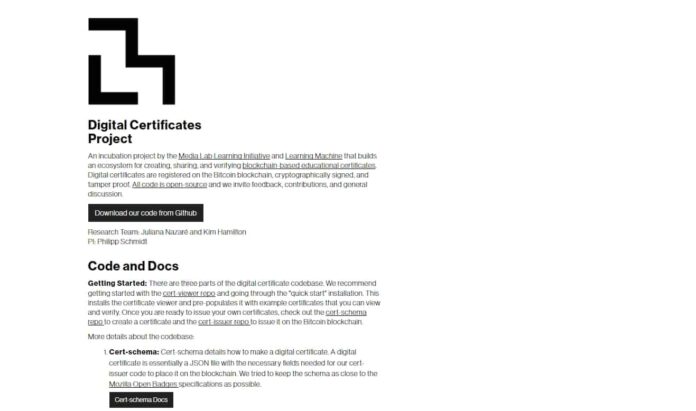 MIT Media Lab bloggers have published and rolled out a fresh, new paper titled: “What we learned from designing an academic certificates system on the Blockchain”.

Over the past year, we have been working on a set of tools to issue, display, and verify digital credentials using the Bitcoin blockchain and the open badges specification. Today we are releasing version 1 of our code under the MIT open-source license to make it easier for others to start experimenting with similar ideas. In addition to opening up the code, we also want to share some of our thinking behind the design, as well as some of the interesting questions about managing digital reputations that we plan to continue working on.

You can find links to their  source code, documentation, and discussion on their project homepage: http://certificates.media.mit.edu.

The overall design of the certification architecture is fairly simple. A certificate issuer signs a well-structured digital certificate and stores its hash within a Blockchain transaction. A transaction output is assigned to the recipient.

Working on this project, we have not only learned a lot about the blockchain, but also about the way that technology can shape socioeconomic practices around the concept of credentials. We hope that sharing some of the things we have grappled with and the decisions we made (and why) will be useful for other developers and institutions interested in developing digital credential systems that make use of blockchain architectures.

Many of the most interesting challenges we encountered were not technical in nature, but they cannot easily be separated from the technology because small design decisions can fundamentally shape behavior. That is why we have taken small experimental steps, tested our system with actual users, and continue to make changes based on what we are learning. The blockchain is a relatively new technology and its complexity and immutability make it even more important to carefully consider the long-term effects of design decisions.

They noted that there has been far too much Blockchain hype. and that Blockchain-based certification systems have become a very hot topic – but added that much of the rhetoric has been exaggerated (and said the same is true for some of the criticism).

One important takeaway for us has been that the Blockchain is a lot more complicated than most people make it out to be. Building applications on top of it–which is what we did–is getting easier, but there are still very few people who deeply understand its inner workings (and we don’t consider ourselves part of that group). The Blockchain is not a simple solution that will fix everything that is wrong with today’s credentials. But it does offer some possibilities for improving the system we have today–and that’s what we are excited to explore.

Facebook
Twitter
Pinterest
WhatsApp
Previous articleDutch Digital Currency Gulden Adds IBAN and SEPA support to Mobile Wallets
Next articlePing Invests in Swirlds – A Next Generation Blockchain Alternative For “Global Single Logout” Dilemma
Richard Kasteleinhttps://www.the-blockchain.com
In his 20s, he sailed around the world on small yachts and wrote a series of travel articles called, 'The Hitchhiker's Guide to the Seas' travelling by hitching rides on yachts (1989) in major travel and yachting publications. He currently lives in Groningen, the Netherlands where he has set down his anchor to raise a family and write. Founder and publisher of industry publication Blockchain News (EST 2015) and director of education company Blockchain Partners (Oracle Partner) – Vancouver native Richard Kastelein is an award-winning publisher, innovation executive and entrepreneur. He has written over 2500 articles on Blockchain technology and startups at Blockchain News and has also published in Harvard Business Review, Venturebeat, Wired, The Guardian and a number of other publications. Kastelein has an Honorary Ph.D. and is Chair Professor of Blockchain at China's first blockchain University in Nanchang at the Jiangxi Ahead Institute software and Technology. He has over a half a decade experience judging and rewarding some 1000+ innovation projects as an EU expert for the European Commission's SME Instrument programme as a startup assessor and as a startup judge for the UK government's Innovate UK division. Kastelein has spoken (keynotes & panels) on Blockchain technology at over 50 events in 30+ cities.