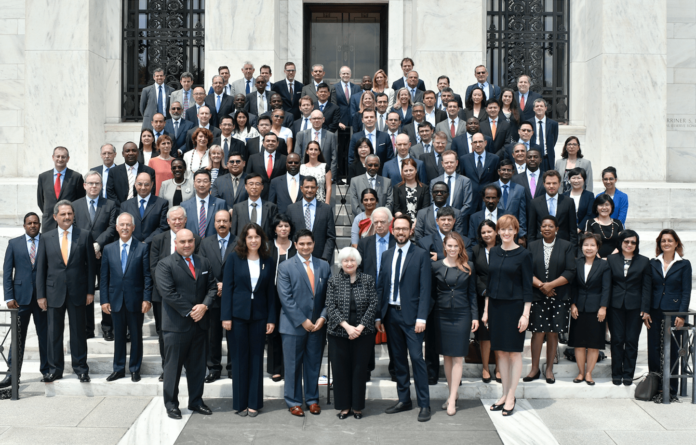 Central banks from over 90 countries participated at the event titled, “Finance in Flux: The Technological Transformation of the Financial Sector,” where the Chamber of Digital Commerce, a global trade association representing the Blockchain industry, helped facilitate discussions at an event hosted by the Federal Reserve, World Bank, and IMF in Washington, DC on June 1 through 3, 2016.

Adam Ludwin, CEO of Chain, delivered the keynote address in the Board of Governors of the Federal Reserve System’s Board Room.

“Blockchain technology will provide central bankers, regulators and policy makers with new tools to enhance the safety, soundness and capabilities of the financial markets and payments systems globally. As participants on industry Blockchain networks, regulators will gain real-time transparency to measure systemic leverage and monitor compliance. And as potential operators of networks for issuing central bank digital currencies, policy makers have the opportunity to forge a payments system that will enhance security, reduce settlement times and create new possibilities for monetary policy,” said Ludwin.

“If I hold this $20 bill in my hand, you know I am the owner. But if I hand it to you, you are now the owner by virtue of the fact that you now hold and control it.

So here’s a pop quiz: now that I have handed you the $20 bill, how do we go about clearing and settling the transaction? It’s a trick question of course, because the answer is that we don’t have to.

With bearer instruments the payment is also the settlement. It is one step. This is a neat property of a bearer instrument. But if the bearer instrument is physical, we have to be in the same room to achieve this. However, with digital bearer instruments like Bitcoin, we can achieve a single payment = settlement step over distance. For example, watch as I send the Wikimedia foundation some bitcoin. Now that I’ve sent it, we are done. The funds moved over the internet. It is as if I handed them cash.

But wait, don’t we have a digital payments system today? Not really. In almost all cases we have a digital messaging system, and those messages trigger a series of steps across multiple organizations: record, clear, settle, reconcile, etc.

The goal of the blockchain industry is to collapse these steps into a single step, where payment is the settlement, just like with physical notes. This is what I mean by digital value transfer, which I sometimes like to call money-over-IP. Soon, the phrase “cross-border payment” will make about as much sense as “cross-border email.”

“Some of the greatest potential benefits of Blockchain technology are going to be first seen and actively leveraged in emerging nations,” said Garzik.

In her remarks, the Chair of the Board of Governors of the Federal Reserve System, Janet Yellen, addressed heightened concerns about cybersecurity. She also said that it’s undeniable that the global financial system has benefited from FinTech and encouraged central banks to do all they can to learn about financial innovations including bitcoin, Blockchain and distributed ledger technologies.

Perianne Boring, Founder and President of the Chamber of Digital Commerce, encouraged the Federal Reserve and central banks to focus on and embrace innovation in Blockchain and distributed ledger technology.

“We believe Blockchain technologies are capable of providing the Fed and other regulators with next generation tools to fulfill their mission of monitoring the safety and soundness of the financial system more effectively,” said Boring.

Chain CEO Ludwig was blunt in his keynote:

“There are many questions and implications of such a future, like the impact it would have on credit creation in the economy, whether it could or should be used as a new tool for monetary policy, and how to protect the privacy of those who hold digital currencies.

But the technology is here and the first movers will find that it grants their currency a comparative advantage as network effects get created around faster and more secure payment networks.

This is why we see central banks around the world already beginning to ask and answer these questions through real technology pilots,”

Facebook
Twitter
Pinterest
WhatsApp
Previous articlePing Invests in Swirlds – A Next Generation Blockchain Alternative For “Global Single Logout” Dilemma
Next articleWISeKey Wants to Provide Every Person on the Planet with a Legal Digital Identity by 2030 With WISeID BlockChain Platform
Richard Kasteleinhttps://www.the-blockchain.com
In his 20s, he sailed around the world on small yachts and wrote a series of travel articles called, 'The Hitchhiker's Guide to the Seas' travelling by hitching rides on yachts (1989) in major travel and yachting publications. He currently lives in Groningen, the Netherlands where he has set down his anchor to raise a family and write. Founder and publisher of industry publication Blockchain News (EST 2015) and director of education company Blockchain Partners (Oracle Partner) – Vancouver native Richard Kastelein is an award-winning publisher, innovation executive and entrepreneur. He has written over 2500 articles on Blockchain technology and startups at Blockchain News and has also published in Harvard Business Review, Venturebeat, Wired, The Guardian and a number of other publications. Kastelein has an Honorary Ph.D. and is Chair Professor of Blockchain at China's first blockchain University in Nanchang at the Jiangxi Ahead Institute software and Technology. He has over a half a decade experience judging and rewarding some 1000+ innovation projects as an EU expert for the European Commission's SME Instrument programme as a startup assessor and as a startup judge for the UK government's Innovate UK division. Kastelein has spoken (keynotes & panels) on Blockchain technology at over 50 events in 30+ cities.