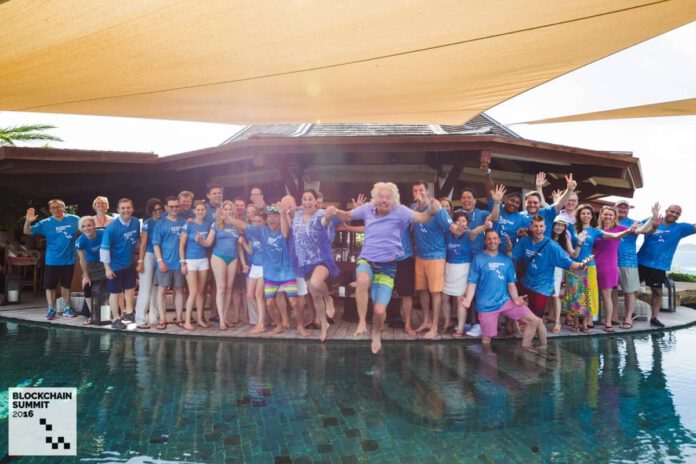 Laura Shin from Forbes was lucky enough to land a writing gig at Richard Branson’s second annual Blockchain Summit on his private Caribbean hideaway Necker Island, and weaved some great coverage from the event.

The attendees included an aerospace engineer, a musician, a derivatives specialist, the founder of a Chinese fintech museum, and former Pentagon and CIA and Department of Homeland Security officials. Sponsors included MaiTai Global, a non-profit event organizers, and BitFury Group, a bitcoin blockchain services and chip manufacturing provider and miner.

The second annual Blockchain Summit — an event considered so exclusive that, as I noted in a previous story, some sources had joked that my attendance this year officially made me “Bitcoin illuminati” — was reaching its culmination.

On Monday night, about 40 people were scattered on Balinese and Javanese teak and bamboo furniture in a room with soaring ceilings decked out with a bar, a pool table, bembe drums and ocean views on three sides. Golden light bathed everything, an easterly wind blew and seagulls glided above the water, but the gathering didn’t notice the setting sun from their tastefully appointed perch on Sir Richard Branson’s Necker Island.

They were all fixated on a large screen, on which renowned Peruvian economist Hernando de Soto was presenting, via videoconference, a plan he and Peruvian presidential candidate Keiko Fujimori are proposing to help citizens title their property, such as land and automobiles. If such systems were rolled out worldwide, De Soto believes they would help bring $20 trillion of dead capital into the world economy and help lift people out of poverty globally.

He told tales of how the lack of land titles or a well-organized system for managing them kept citizens in certain countries from building credit or profiting from, say, oil, gas and gold rights on the land. He said it has also contributed to 70% of the Peruvian population living in shantytowns without running water, because piping water in requires knowing who will pay the water bill — and that can’t be determined without a title. And, he added, the majority of rapes of women in shantytowns occur when they go to outdoor bathrooms in the dark of night because there is no electricity.

Read more of Shin’s great coverage from the event here.

Facebook
Twitter
Pinterest
WhatsApp
Previous articleWorld Wide Web Creator Tim Berners-Lee Wants to Decentralise the Internet with P2P and Blockchain Technologies
Next articleIBM To Invest in Blockchain and AI Development in Asia
Richard Kasteleinhttps://www.the-blockchain.com
In his 20s, he sailed around the world on small yachts and wrote a series of travel articles called, 'The Hitchhiker's Guide to the Seas' travelling by hitching rides on yachts (1989) in major travel and yachting publications. He currently lives in Groningen, the Netherlands where he has set down his anchor to raise a family and write. Founder and publisher of industry publication Blockchain News (EST 2015) and director of education company Blockchain Partners (Oracle Partner) – Vancouver native Richard Kastelein is an award-winning publisher, innovation executive and entrepreneur. He has written over 2500 articles on Blockchain technology and startups at Blockchain News and has also published in Harvard Business Review, Venturebeat, Wired, The Guardian and a number of other publications. Kastelein has an Honorary Ph.D. and is Chair Professor of Blockchain at China's first blockchain University in Nanchang at the Jiangxi Ahead Institute software and Technology. He has over a half a decade experience judging and rewarding some 1000+ innovation projects as an EU expert for the European Commission's SME Instrument programme as a startup assessor and as a startup judge for the UK government's Innovate UK division. Kastelein has spoken (keynotes & panels) on Blockchain technology at over 50 events in 30+ cities.