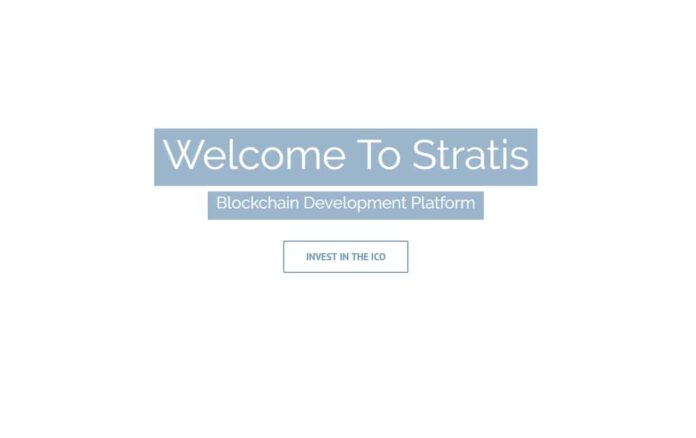 UK Blockchain company Stratis has raised USD$100,000  from investors, with plenty of time left to run on its crowdfund.

“Blockchain is a game changer but there is still a real need to lower the barriers to entry so that more people can get involved with the technology, discover it’s utility and ultimately be able to compete in a changing marketplace,” said  Chris Trew, Founder, Stratis

Stratis aims to build a unique Blockchain Development Platform that can accelerate and simplify the process for organizations wishing to develop Blockchain apps.

The Stratis platform will provide an off-the-peg solution for the creation and management of Blockchains in minutes. Users will be able to customise their own private chains, which will then be secured on Stratis ‘parent’ chain – tokens can be moved between the parent chain and child chains via a two way peg solution. In this way Stratis will significantly simplify the development process for creating Blockchain applications and lower the barriers to entry for smaller organisations, enabling them to stay ahead of the curve.

Architectural integrity is extremely important to Stratis, which aims to develop a Bitcoin full node framework in C# and the Microsoft .NET framework. A full node built from the trusted and proven architecture of Bitcoin will create a solid foundation for the service, something that has been missing in private chain projects to date. In addition, choosing to develop in C#, an alternative to Bitcoin’s C++ and a more popular programming language for business applications, will prove beneficial for the whole industry since it will bring more developers into the community. Stratis are pleased to have the expertise of Bitcoin developer Nicolas Dorier on the team.

Our company is primarily focused on Blockchain provisioning for the business community in an increasingly digital economy.

Facebook
Twitter
Pinterest
WhatsApp
Previous articleEx-Google Engineer Launches Blockchain for Banks
Next articleBlockchain Company SETL Hires City Heavyweights
Richard Kasteleinhttps://www.the-blockchain.com
In his 20s, he sailed around the world on small yachts and wrote a series of travel articles called, 'The Hitchhiker's Guide to the Seas' travelling by hitching rides on yachts (1989) in major travel and yachting publications. He currently lives in Groningen, the Netherlands where he has set down his anchor to raise a family and write. Founder and publisher of industry publication Blockchain News (EST 2015) and director of education company Blockchain Partners (Oracle Partner) – Vancouver native Richard Kastelein is an award-winning publisher, innovation executive and entrepreneur. He has written over 2500 articles on Blockchain technology and startups at Blockchain News and has also published in Harvard Business Review, Venturebeat, Wired, The Guardian and a number of other publications. Kastelein has an Honorary Ph.D. and is Chair Professor of Blockchain at China's first blockchain University in Nanchang at the Jiangxi Ahead Institute software and Technology. He has over a half a decade experience judging and rewarding some 1000+ innovation projects as an EU expert for the European Commission's SME Instrument programme as a startup assessor and as a startup judge for the UK government's Innovate UK division. Kastelein has spoken (keynotes & panels) on Blockchain technology at over 50 events in 30+ cities.