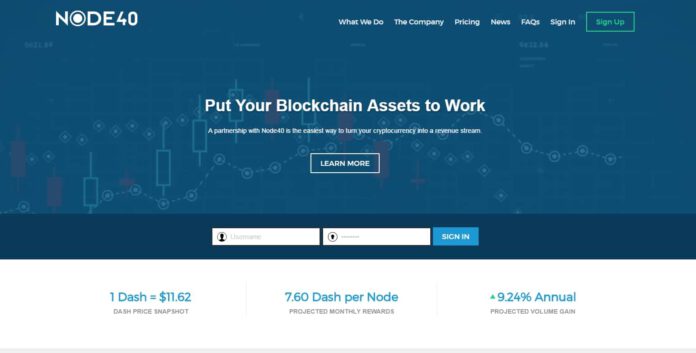 Node40, a Blockchain governance company providing investors with an easy-to-generate and passive revenue stream, today announced a highly requested feature for Masternode owners, Masternode Portfolio Insight. The feature is designed to showcase asset performance for every Node40 customer, all of whom are investors in the popular, stable cryptocurrency Dash, and is the first of its kind in the crypto community.

“Node40’s Masternode Portfolio Insight reports help users better visualize their investment performance in ways traditional investors are used to. Every transaction associated with a customer’s Masternode is calculated against the daily Dash USD average. This allows our customers to do an apples-to-apples comparison against other more traditional assets. We are firm believers in the importance of Blockchain governance, allowing users to one-click vote on submitted network proposals, and we are known for being the only node hosting service that guarantees payment.”

Node40’s Masternode Portfolio Insight illustrates with precision how each Node performs fully tracked against the United States dollar on a monthly, quarterly and annual basis with upcoming support for real-time custom ranges. Moreover, the online reporting tool will show Masternode owners exactly how their cryptocurrency gains stack up against other traditional forms of investment such as property, savings account gains, or stock market returns.

As a result, the tool is an important step in the path to mainstream Blockchain adoption. Node40’s new feature is accessible to customers via a recently rejuvenated and improved UI, showing users exactly how many network rewards have been received in a reporting period, how much value they’ve accrued in both Dash and USD, while tracking gains as well.

“As a US Corporation, we are required to file taxes. Since most of our customers pay with digital currency, we needed a way to calculate the USD cost of all incoming transactions and then determine if there was a gain or loss when we converted to USD. We built a tool that calculated the USD value of every transaction along with gain/loss for outgoing transactions and provided the data to our accountants. If transactional data with calculated gains/losses and unrealized gains/losses for an entire portfolio was useful to us, then it would also be useful to our customers.”

Node40 is gaining significant momentum due to the rising value of the world’s 7th most valuable cryptocurrency, Dash, which has quintupled in value from this time last year.

Blockchain-Based Travala.com Teams Up with Dash For Hotel Booking Payments