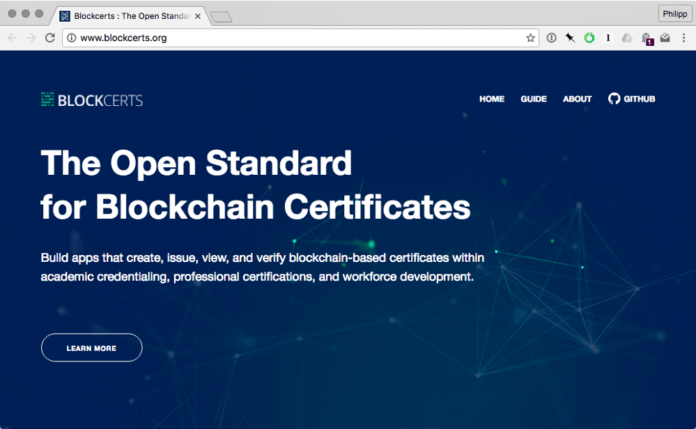 The Bitcoin Blockchain acts as the provider of trust, and credentials are tamper-resistant and verifiable.

There are four Blockcerts components:

Issuer — Universities create digital academic certificates that can contain a wide range of assertions about an individual’s skills, achievements, or characteristics, and register it on the bitcoin Blockchain.

Verifier — Anyone can, without having to rely on the issuer, verify that (1) a certificate has not been tampered with, that (2) it was issued by a particular institution, and (3) issued to a specific user.

Wallet — Individuals can safely store their certificates, and share them with others, for example, an employer. The iOS wallet is available already, and we are looking for partners to develop an Android version.

They stress the importance of Open Source in a Medium post:

At its core, Blockcerts is open. The software is open source and anyone is welcome to join the developer community.

Only an open standard allows individuals to remain fully in control of their own academic history. That is important, because academic certificates are markers of our lives. They can be tickets to a better job or education, and we can use them to tell a story about who we are and how we have become that person.

And being open enables us to bootstrap a new ecosystem for digital academic credentials, by allowing other collaborators to take co-ownership. Through collaborating around an open standard, we can help to insure an interoperable credentialing ecosystem.

The Bitcoin Blockchain is still a relatively new technology and its complexity and immutability make it important to carefully consider the long-term effects that small design decisions can have. Letting others review and contribute will make Blockcerts more robust and reliable.

Blockcerts started as a research project at the MIT Media Lab, led by Philipp Schmidt and Juliana Nazare (with help from many others, including Guy Zyskind and Jeremy Rubin), and they collaborated with Learning Machine, an education technology company. Kim Hamilton was the technology lead and release manager for the core software and standard, and Chris Downie developed the iOS wallet reference implementation. Chris Jagers and Dan Hughes, were instrumental in thinking through the broader implications of an open standard for academic certification.