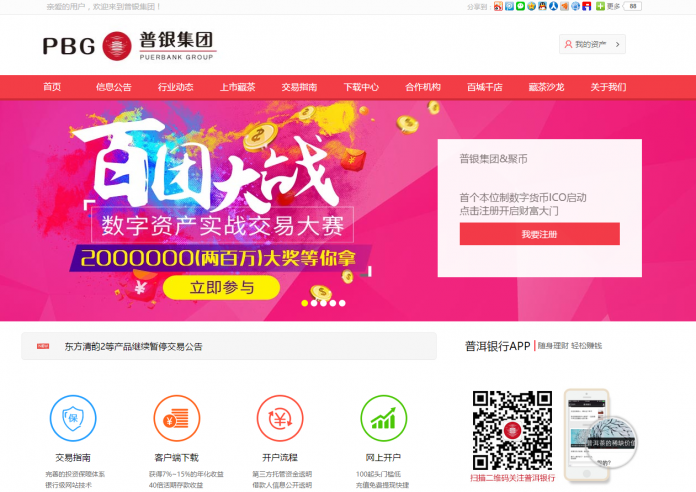 An agreement on the establishment in the UK of a global node for a standardized digital currency based on Blockchain technology was formally signed at Central Hall Westminster on January 9.

China’s Puerbank Group delivered the new node that will function both from an operation as well as a technological viewpoint in line with a standardized system for digital currency. The group plans to collaborate with selected companies in the UK during the establishment of the node and in an interchange of various forms of assets valued at 5 billion yuan (approx. US$720 million). Representatives from the Chinese Embassy in the UK, the UK Research and Development Centre for Chinese Traditional Culture (UKCTC), The Thames Group, Singapore Shipping Group and Central Saint Martins attended the signing ceremony.

Puerbank Group has established a standard and a complete set of operating protocols for a digital currency and built the first large node for the currency in China. The group is gradually promoting its way of thinking in terms of how digital currencies should be managed as well as the technologies that should be deployed worldwide, and its token (the digital assets that circulate on the Blockchain) as well as the business that has been built up around the use of the token has received wide support from many companies in China since its launch, laying a solid foundation for the global expansion of Blockchain finance. In the UK, Puerbank Group plans to provide technologies that can be deployed to assist in the building of a digital asset module as well as to accomplish the exchange of assets between nodes within the country, and, at a point in the not too distant future, the exchange of digital assets worldwide.

“In many countries around the world, Blockchain was one of the hottest topics of 2016. Blockchain-based private digital currencies developed fast, and at the same time, the competition among digital currencies quickly became so fierce that even the Bank of England announced its intention to run virtual currencies as a trial. As a result of these rapidly unfolding events, existing digital currency issuers quickly found themselves obliged to establish an effective operating system, especially in view of the need for asset safety and to provide a platform that would allow issuers to build a reputation. Puerbank Group believes that having a fully standardized system is the most effective way to enhance competitiveness among private digital currencies,” said Mr. Seven, Chief Overseas Representative of Puerbank Group, when commenting on the development of asset digitalization.

In China, Puerbank Group first assembled some highly refined collector’s tea and established the tea as the standard asset, and, on the back of the asset, issued a digital currency in full compliance with the standard that it had developed. The group named the currency Puyin. Then, through an open-source asset expansion program, the assets grew in volume and now have a value in excess of 100 billion yuan (approx. US$15 billion). Puerbank Group took steps to make sure that their technology was sufficiently robust to handle the high volume of assets swaps. The model proved highly effective in that available market resources were quickly mobilized, and a rapid, high-frequency, exchange of commodities started to take place, significantly promoting economic growth. This model can be localized to build nodes anywhere worldwide, and, by using the local node, manage a Blockchain-based financial eco-system in tandem with localized “local currencies”. Ultimately the model will be able to handle cross-border asset conversion and circulation through the exchange and settlement of these “local currencies” in combination with “tokens” such as Puyin.

At the same time that the node in the UK was established, a node in California’s Silicon Valley was also put in place. The global blueprint of a digital currency backed by a standard has begun its infinite extension from two points connected by a single line. It will be not long before digital assets are quickly converted free of obstacles within a full-functioning infrastructure via a standardized digital currency. The world of commerce looks forward to that day.

Facebook
Twitter
Pinterest
WhatsApp
Previous articleDU and Guardtime Partner with Dubai’s NMC Hospital to Revolutionize Electronic Health Records with Blockchain Technology
Next articleWaves Platform Implements New Blockchain Scalability Approaches
Richard Kasteleinhttps://www.the-blockchain.com
In his 20s, he sailed around the world on small yachts and wrote a series of travel articles called, 'The Hitchhiker's Guide to the Seas' travelling by hitching rides on yachts (1989) in major travel and yachting publications. He currently lives in Groningen, the Netherlands where he has set down his anchor to raise a family and write. Founder and publisher of industry publication Blockchain News (EST 2015) and director of education company Blockchain Partners (Oracle Partner) – Vancouver native Richard Kastelein is an award-winning publisher, innovation executive and entrepreneur. He has written over 2500 articles on Blockchain technology and startups at Blockchain News and has also published in Harvard Business Review, Venturebeat, Wired, The Guardian and a number of other publications. Kastelein has an Honorary Ph.D. and is Chair Professor of Blockchain at China's first blockchain University in Nanchang at the Jiangxi Ahead Institute software and Technology. He has over a half a decade experience judging and rewarding some 1000+ innovation projects as an EU expert for the European Commission's SME Instrument programme as a startup assessor and as a startup judge for the UK government's Innovate UK division. Kastelein has spoken (keynotes & panels) on Blockchain technology at over 50 events in 30+ cities.